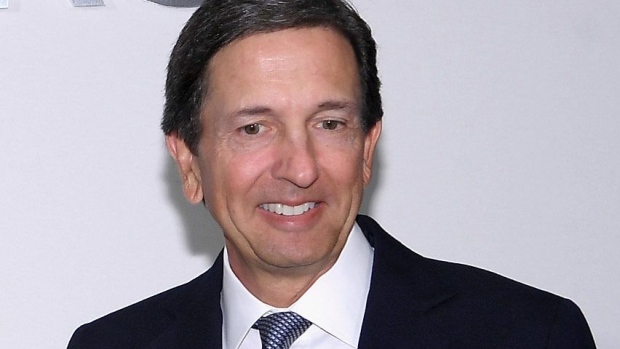 Employees adjust clothing on a window display mannequin inside a Gianni Versace Srl luxury store in Zurich, Switzerland, on Thursday, Feb. 4, 2021. Swiss National Bank President Thomas Jordan says business shutdowns to contain the pandemic mean economic growth in the final quarter of 2020 and the first quarter of this year will be weak, according to interview with broadcaster SRF. Photographer: Stefan Wermuth/Bloomberg , Bloomberg

(Bloomberg) -- The chief executive officer of Capri Holdings Ltd. said he is optimistic about the outlook for the company’s three brands -- especially Versace.

Revenue at the Italian fashion label, known for its extravagant and baroque designs, has been more robust than expected when Capri bought the company in 2018, in part because of strong accessory sales. The Italian luxury house could beat its mid-term revenue target of $2 billion sooner than anticipated, Idol said.

“I’m getting close to ready to say –- we’re going to go beyond that number,” John D. Idol said during a Morgan Stanley retail conference on Thursday. “It’s a matter of when.” Versace’s growth will be a major contributor to Capri’s overall profitability, he added.

For Capri’s other brands, Idol said that Jimmy Choo’s revenue target of $1 billion is “clearly in sight” and $4 billion or more for Michael Kors is also “looking to be more clear than it probably was previously.”

After the bullish comments, Capri looks more likely to beat the $7 billion mid-term revenue target it set prior to the onset of the pandemic, said Bloomberg Intelligence analyst Deborah Aitken. The arrival earlier this year of Joshua Schulman, who currently leads Michael Kors and will succeed Idol as CEO of the parent company later next year, adds to optimism around the company following his success at turning around Coach, she said.

“Versace’s $2 billion revenue goal seems most likely to be the first to be beaten,” Aitken said.