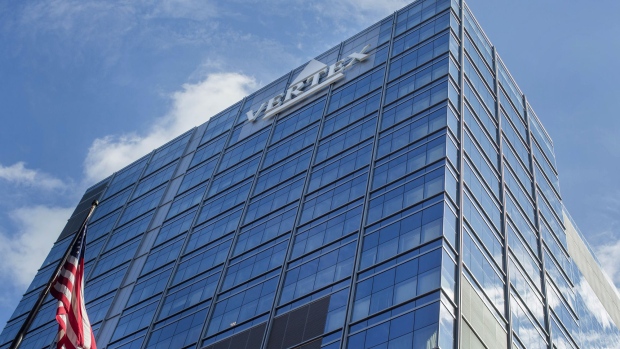 The Vertex Pharmaceuticals Inc. building stands in Boston, Massachusetts, U.S., on Wednesday, Oct. 19, 2016. Vertex Pharmaceuticals will receive an upfront payment of $75 million and additional payments of up to $6 million a year for the development of new cystic fibrosis medicines under an amended research agreement with the Cystic Fibrosis Foundation. Photographer: Scott Eisen/Bloomberg , Bloomberg

Vertex is on track to file IND applications for both programs next year, Arbuckle said. He declined to provide a more specific timeline.

Investors are searching for growth beyond cystic fibrosis, which causes severe damage to the lungs, digestive system and other organs. Vertex is pursuing a number of new disease areas, including Type 1 diabetes, sickle cell disease and severe kidney disease.

“We know it’s a show-me world and people are looking for evidence our strategy’s right,” Arbuckle said. Vertex plans to share data from trials in other programs such as severe kidney disease in the coming months.

“Hopefully if they’re positive, they’ll allow people to see the strategy we’re pursuing does have a disproportionately high chance for success,” Arbuckle said. “That’s what we believe, and that’s what we’re expecting to see.”

Shares of Vertex rose 1.5% after hours on Tuesday. They had fallen 23% this year as of Tuesday’s close.