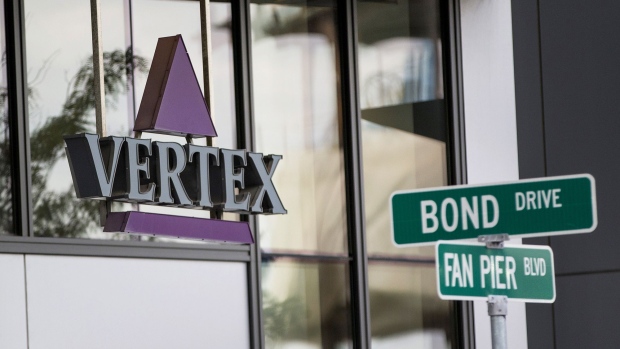 Vertex Pharmaceuticals Inc. signage is displayed at the entrance to the company's building in Boston, Massachusetts, U.S., on Wednesday, Oct. 19, 2016. Vertex Pharmaceuticals will receive an upfront payment of $75 million and additional payments of up to $6 million a year for the development of new cystic fibrosis medicines under an amended research agreement with the Cystic Fibrosis Foundation. Photographer: Scott Eisen/Bloomberg , Bloomberg

(Bloomberg) -- Vertex Pharmaceuticals Inc. ended a closely watched effort to develop a therapy for liver disease, a setback in the biotech’s quest to broaden its offerings beyond cystic fibrosis drugs. The shares plunged in post-market trading.

After reporting results from a mid-stage trial, Vertex said its experimental treatment, VX-864, isn’t likely to substantially benefit patients. The company discontinued development of a similar compound last fall due to safety issues. Both were aimed at treating alpha-1 antitrypsin deficiency, an inherited disease where the patient’s liver doesn’t make a protein needed to protect itself and the lungs.

The shares fell as much 15% after U.S. markets closed Thursday. They had lost 8.3% this year through the 4 p.m. close.

Vertex has become a biotech darling based on sales of highly successful therapies for cystic fibrosis, a progressive genetic condition that leaves patients vulnerable to lung infections. The failure raises pressure to diversify beyond those core drugs and bolster its pipeline of new medications.

The results were seen as an important milestone not just for Vertex but the biotech sector broadly. U.S. approval for Biogen Inc.’s Alzheimer’s disease drug and expanded use of Vertex’s Trikafta for cystic fibrosis had indicated a revving up of the sector after months of exclusive focus on the pandemic.

Patients who received VX-864 saw an increase in levels of the protein, called alpha-1 antitrypsin, compared to those who received a placebo; still, it didn’t produce a meaningful clinical benefit, Vertex said.

Vertex will continue to explore the class of drugs for treatment of alpha-1 antitrypsin deficiency, Chief Medical Officer Carmen Bozic said in a statement. The company plans to begin clinical work on more small-molecule drugs for the disorder next year.

The safety profile and elevated protein levels among those treated with VX-864 are encouraging, Vertex said. Diarrhea and nausea were the most common side effects, and all but one patient completed the trial.