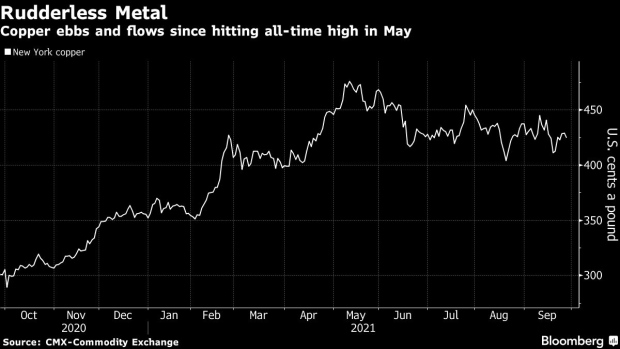 (Bloomberg) -- As investors weigh swirling macro-economic factors, market fundamentals for copper -- a key metal in global construction and transportation -- remain solid, according to an industry veteran.

Prices for the bellwether commodity this year will average more than $4 a pound, Diego Hernandez, head of Chilean mining society Sonami, said in an interview Tuesday. That would be a record annual average.

The supply-demand equation for copper is “very tight,” even amid market-wide uncertainties fueled by Chinese property turmoil and a global energy crunch, said Hernandez, who’s a former chief executive of Codelco and Antofagasta Plc. Prices for the metal have pulled back since touching an all-time high in May, but probably won’t fall much further this year, he said.

The metal used in wiring also has an auspicious longer-term outlook in a global transition toward cleaner energy and transport. Still, some new mines entering the market -- such as Anglo American Plc’s Quellaveco in Peru and Ivanhoe Mines Ltd.’s Kamoa-Kakula in the Democratic Republic of the Congo -- will add to supply. That signals slightly lower prices next year and in 2023, although with a floor of $3.50, Hernandez said.

“We shouldn’t have big surprises through year-end,” he said. “Supply and demand in the coming years should remain fairly tight so prices should be not extraordinary, but good -- higher than long-term projections.”

Hernandez doesn’t see any imminent risks for the Chilean copper industry from a global energy crunch, although rising diesel could push up costs.

Producers in the biggest copper-producing nation have also been able to navigate global shipping disruptions so far, he said. The only delays to Chilean copper exports in the last couple of months have come from rough seas, but such port disruptions typically recover quickly, he said.

Chilean copper production this year and next probably will remain at similar levels to 2020, Hernandez said.