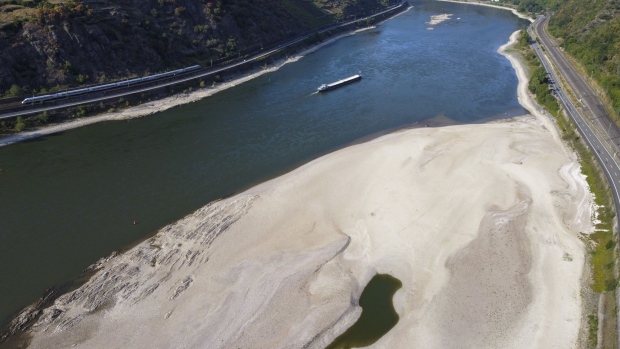 A barge travels past an exposed riverbed on the River Rhine near Oberwesel, Germany, on Friday, Aug. 12, 2022. The Rhine River fell to a new low on Friday, further restricting the supply of vital commodities to parts of inland Europe as the continent battles with its worst energy crisis in decades. Photographer: Alex Kraus/Bloomberg , Bloomberg

(Bloomberg) -- A vessel blocked the Rhine River after suffering a technical fault, yet another glitch for the key waterway that has become difficult to navigate because of drought.

A section of the river between St. Goar and Oberwesel was closed, a spokesman for the WSA water authority said on Wednesday morning. That’s on a narrow part of the river near the closely watched Kaub chokepoint.

The blockage occurred just as the water level at Kaub is starting to edge higher. After falling as low as 30 centimeters (11.8 inches) earlier this week, it’s now forecast to reach 49 centimeters (19.3 inches) early on Aug. 21. The level isn’t the actual depth of the river, but rather a marker used for navigability. The river can be a few feet deeper than the marker.

The WSA said it was possible the barge would be towed on Wednesday.

Low water levels are restricting the shipment of commodities along the Rhine River, which snakes for about 800 miles from the Swiss Alps down to the North Sea. This latest setback only adds to the logistical difficulties already facing shippers.

The marker at Kaub is currently 34 centimeters, meaning the water is so shallow that it’s uneconomical for many commodity-hauling barges to sail through the chokepoint. That’s curbing the shipment of vital goods to locations further upriver, including parts of southern Germany and Switzerland.

Low water levels are set to continue limiting shipments for some time yet. Even if the marker at Kaub rises to 49 centimeters as forecast, many barges will still be severely restricted in how much cargo they can carry through the chokepoint at that level.

Energy prices in Europe have soared amid the crisis. Coal futures reached a record on Wednesday. Barge rates to ship some fuel from Rotterdam to Basel, Switzerland are near an all-time high.