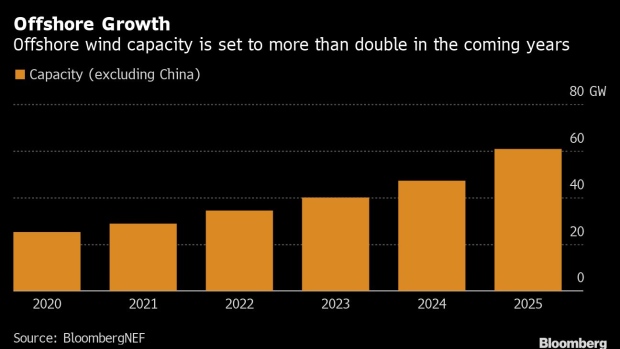 A V164 80-metre long wind turbine blade, manufactured by MHI Vestas Offshore Wind A/S, passes moored boats in Cowes on the Bladerunner II transport vessel on the Isle of Wight, U.K., on Friday, July 17, 2020. The offshore wind market will probably continue to grow faster than its onshore counterpart because the large size and scale of machines sited at sea. Photographer: Chris Ratcliffe/Bloomberg , Bloomberg

Vestas Wind Systems A/S, the world’s biggest wind turbine manufacturer, will buy out its offshore joint venture partner in an all-share deal that looks to take advantage of an expanding industry at the heart of the energy transition.

The 709 million-euro ($832 million) deal for Mitsubishi Heavy Industries, Ltd.’s 50% share in the partnership will integrate the offshore business into Vestas’s much bigger onshore wind operation. It’s a move that the Denmark-based manufacturer hopes will help it dominate the industry by 2025.

“Vestas is the leader in onshore wind, but to accelerate the energy transition and achieve our vision we must play a larger role in offshore,” said Henrik Andersen, Vestas’s chief executive officer.

The offshore wind market has become increasingly competitive as governments look to transition away from fossil fuels by, in part, installing massive turbines at sea.

The dominant Siemens Gamesa Renewable Energy SA is already fighting for market share from General Electric Co. Over the last five years, MHI Vestas Offshore Wind A/S has had about 28% of the offshore wind turbine market, compared to 54% for Siemens Gamesa.

The merger of the offshore business into Vestas will help the company to optimize its current manufacturing footprint, Andersen said.

Vestas and MHI will also establish a joint venture in Japan to sell wind turbines.

(An earlier version of this story corrected the currency conversion in the headline and second paragraph.)