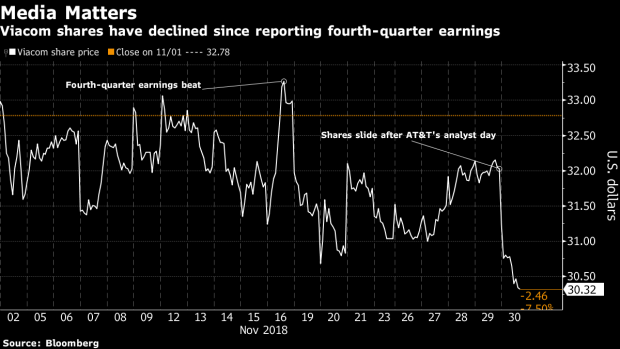 (Bloomberg) -- Viacom Inc.’s turnaround may prove to be a much longer saga than Chief Executive Officer Bob Bakish bargained for.

"Although management has referenced it on numerous occasions, we have yet to see evidence of a true turnaround at Paramount," said Imperial Capital’s David Miller in a Nov. 28 note to clients. Imperial reduced its fiscal first-quarter earnings estimates due to a weaker-than-expected box office for "Instant Family," which was "well beneath its negative costs."

And more woes may lie ahead for Viacom, which sits at the intersection of traditional media, streaming capabilities and Internet television.

Where Viacom has opted for a partnership with Netflix Inc. to drive new sources of growth, AT&T Inc. has decided to weaponize its own arsenal of Time Warner media assets. The telecom giant announced plans at Thursday’s analyst day to premiere a three-tiered streaming-video service late next year.

AT&T’s move to streaming follows other media conglomerates, such as Walt Disney Co., who hope to lure more viewers with their own content. For an industry that is now in a global competition for subscribers, self-sufficiency in content is more imperative than it’s ever been.

AT&T will lean on new HBO content from WarnerMedia in an effort to drive the new streaming service. Multiple traders say the company is hoping to better manage its spending on content with a bigger emphasis on using its own assets -- which threatens content distributors including Viacom and CBS Corp.

Viacom Class B shares fell as much as 5.6 percent intraday, dropping back below their 200-day moving average.

--With assistance from Arie Shapira.

To contact the editors responsible for this story: Catherine Larkin at clarkin4@bloomberg.net, Scott Schnipper, Sebastian Silva