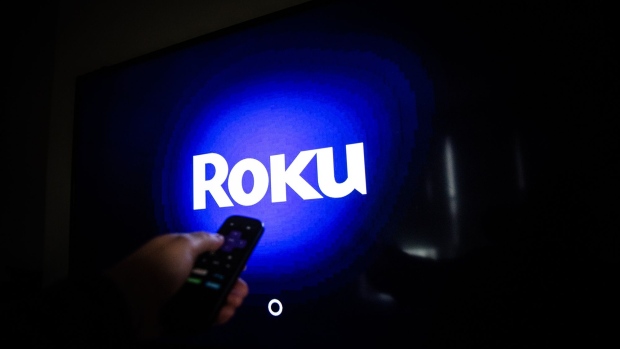 A Roku Inc. signage on a Smart television in an arranged photograph in Hastings-on-Hudson, New York, U.S., on Sunday, May 2, 2021. Roku Inc. is scheduled to release earnings figures on May 6. Photographer: Tiffany Hagler-Geard/Bloomberg , Bloomberg

(Bloomberg) -- Shares of ViacomCBS Inc. and Roku Inc. gained on speculation that Comcast Corp. might make a bid for one of the companies, extending a string of media-industry deals.

Comcast Chief Executive Officer Brian Roberts has considered a transaction with ViacomCBS or an acquisition of Roku, the Wall Street Journal said Wednesday, citing an unidentified person familiar with the matter. But the CEO has told people close to him that he doesn’t need to seek a merger, the newspaper reported.

The speculation follows a flurry of merger activity, including Amazon.com Inc.’s $8.45 billion acquisition of Metro-Goldwyn-Mayer and AT&T Inc.’s agreement to combine its WarnerMedia division with Discovery Inc. ViacomCBS itself was created out of a merger of Viacom and CBS completed near the end of 2019.

The deals have raised questions about Comcast’s future. The cable giant owns NBCUniversal, a sprawling entertainment operation that includes TV and movies. But its Peacock streaming service is playing catch-up with Netflix Inc. and Walt Disney Co. Roberts is grappling with whether to buy something or build from within to become a streaming powerhouse, the Journal reported.

Comcast declined to comment. Executives at the Philadelphia-based company have said recently that they’re happy with their portfolio of assets and don’t need to buy another company.

“We feel like we’ve got all the advantage we need to pursue value creating opportunities for growth in NBC and Peacock,” Comcast Chief Financial Officer Michael Cavanagh said at an investor conference last month.

The prospect of a deal also isn’t popular with Comcast investors. They sent the shares down 3.7% to $55.48 on Wednesday, the biggest tumble in more than a month.

Comcast has previously been aggressive in pursuing transactions. In the decade since it acquired NBCUniversal, it bought European satellite-TV company Sky Plc and attempted -- unsuccessfully -- to outbid Disney for Fox’s entertainment assets.

Acquiring ViacomCBS, which owns the Paramount+ service, would make Comcast a contender for the No. 3 spot in the streaming industry, behind Netflix and Disney, according to Bloomberg Intelligence analysts Geetha Ranganathan and Kevin Near.

Buying Roku, meanwhile, would “supercharge its streaming distribution efforts,” but might make less sense since Comcast already has its own streaming hardware, the Flex product.

In any case, the M&A efforts would be “fraught with regulatory challenges,” the analysts said, and carry a massive price tag. ViacomCBS has a market value of $27.2 billion, while Roku is worth $55.8 billion.