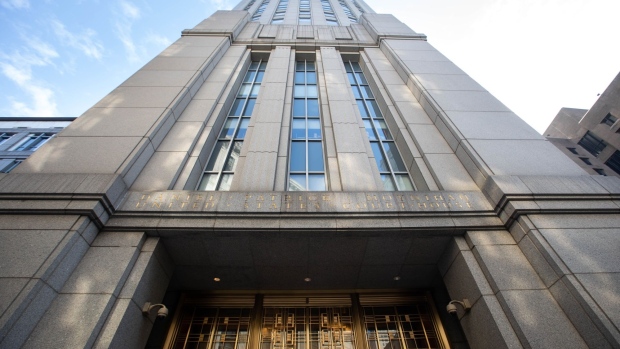 The Daniel Patrick Moynihan U.S. District Court for the Southern District of New York Courthouse in New York, U.S., on Monday, Dec. 21, 2020. With vaccinations heralding a return to normalcy, the next year should see courtrooms around the world coming back to life. Ghislaine Maxwell, China critic Jimmy Lai and Samsung heir Jay Y. Lee are among those facing high-profile criminal cases in 2021. Photographer: Michael Nagle/Bloomberg , Bloomberg

(Bloomberg) -- Stefan Qin’s investors thought they’d found a sure thing -- a hedge fund that was generating 500% returns by exploiting the price gaps between cryptocurrencies on 40 exchanges throughout the world.

Instead, the 24-year-old self-proclaimed math whiz used their money on a lavish lifestyle, including a $23,000-a-month Manhattan penthouse apartment, and failed investments in initial coin offerings and real estate. Federal prosecutors said Qin defrauded more than 100 people out of about $90 million.

Now, some of his victims are urging U.S. District Judge Valerie Caproni to put Qin behind bars for as long as possible when he is sentenced on Wednesday in New York for securities fraud.

“I feel like it is about time that the criminal justice system actually does what it is intended to do,” Ying Liu, 41, who lost $350,000 in savings, said in a letter to the judge. “Keep the criminals locked up, and the community safe. I can’t bear the fact of this happening to someone else again. I can’t have that on my conscience, can you?”

Liu urged Caproni to sentence Qin to the “maximum sentence allowable by law,” saying he has “affected hundreds of people and families around the world.”

More than a dozen other investors wrote to the judge, including several who said they had lost their life savings to Qin, an Australian national who dropped out of college to found Virgil Sigma Fund LP in 2017. One woman said she was left  “homeless and destitute.”

Qin claimed he had developed a special trading algorithm called Tenjin that could earn profits by buying a cryptocurrency on one exchange and selling it at a higher price on another. Shortly after starting Virgil, he bragged the fund produced an annual return of 500% in 2017. The Wall Street Journal wrote a profile of him in 2018, when he managed $23.5 million. By 2020, he’d raised more than $90 million.

Near the end of last year, as losses mounted, investors started to demand their money back. To make those payments, Qin tried to raid another fund he had started, the VQR Multistrategy Fund LP, according to prosecutors. But the U.S. Securities and Exchange Commission in December got cryptocurrency exchanges to put a freeze on VQR’s assets.

After that, Qin flew back to the U.S. from South Korea, surrendered to authorities in February and pleaded guilty the same day.

While Qin faced as much as 20 years in prison, federal sentencing guidelines call for 151 to 188 months. Probation officials recommended 96 months, based on his lack of a criminal record and his voluntary return from overseas to face charges.

Prosecutors urged “substantial” prison time given the “brazen nature” of Qin’s crime and the need to stop discourage others from doing the same thing.

“Qin used that hedge fund as his own piggy bank, stealing investor money to live a lavish lifestyle and repeatedly lying to investors about what he was doing with their money,” Assistant U.S. Attorney Daniel Tracer said in a sentencing memo.

Defense lawyers asked for a sentence of 24 months, noting Qin took responsibility for his actions and helped authorities to recover some of the lost money.

“Mr. Qin is a young man with great intellectual potential and talent, who has faced significant emotional trauma and psychological struggle to this point in his life,” his lawyers said in a letter to the judge. “Perhaps seeking to ameliorate his emotional pain, Mr. Qin chased financial success, and between the ages 20 and 24, his ambitions got the best of him, leading him to make a series of bad decisions relating to the founding and management of the Sigma and VQR funds.”

But one investor told the judge not to be swayed by Qin’s personal charm, a characteristic that helped him defraud so many.

“Mr. Qin did not steal food from a grocery to feed his family,” said the investor, Steve Reich. “He stole over $90 million from ordinary people and has shown no genuine remorse.”