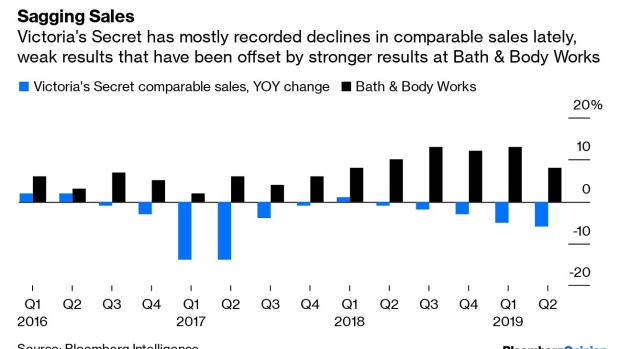 (Bloomberg Opinion) -- If L Brands Inc. is to recover some of the $16 billion in market value it has lost in the past three years, there is no doubt where it must start: by reviving its flagship Victoria’s Secret chain.

The lingerie retailer has been flailing as it missed key fashion trends and clung to an outdated glamour-puss vibe in its marketing. At a Tuesday event for investors, Victoria’s Secret Chief Executive Officer John Mehas offered up his vision for a revival. Unfortunately, it was frustratingly vague — making it difficult to say whether things will turn positive anytime soon for Victoria’s Secret.

Advertising is one of the areas where Victoria’s Secret most acutely needs an overhaul, and the recent departure of longtime marketing chief Ed Razek provided a glimmer of hope that change was imminent. The brand needs to be seen as “by her, for her,” said Mehas, without providing too many specifics. (There was also a certain irony in the fact that, as my colleague Jordyn Holman noted, the company trumpeted this notion during an event in which most of the speakers were men.)

If the new mantra indicates an intention to deliver a more empowering message, then it’s an encouraging sign. Again, however, details were lacking. Would the company replace its splashy holiday fashion show, which it has said it is rethinking? Mehas didn’t say.

He did show a video presentation of Victoria’s Secret’s new collaboration with the brand For Love & Lemons. It featured racially diverse models that didn’t necessarily have the Barbie-doll bodies of past Victoria’s Secret campaigns, suggesting a fresh and much-needed focus on inclusivity. Yet the product in the ad was more frivolous than functional.

Mehas also talked about needing to get back to an emphasis on bras, innovating in this core product area to win women back. That is surely the right idea, though there was no single forthcoming product described that sounds like it could truly separate it from the competition.

Meanwhile, Victoria’s Secret has been working to change its pricing strategy to offer a mix of “good, better, best” items that it hopes will nudge shoppers toward paying more premium prices. It is a sensible choice, as it would make Victoria’s Secret more distinctive from its sister chain, Pink, and could help pad profit margins.

The problem is that the lingerie chain has leaned so heavily on discounts for so long that it is going to have a hard time training shoppers to pay up. Executives didn’t have a particularly satisfying explanation for how they will manage to do that.

Despite all this vague talk of what’s to come at Victoria’s Secret, investors sent shares of L Brands up more than 3% on Tuesday. This probably reflects faith in the company’s Bath & Body Works chain, which looks poised to continue a streak of solid performance, as well as optimism about Pink, its lingerie and apparel store aimed at the college set. Pink’s new leader, Amy Hauk, outlined her vision for restoring that chain with a focus on athletic wear — a tack away from big logos and bling — and a marketing campaign featuring college students with “real bodies.”

Those chains, though, can only take the company so far. Victoria’s Secret needs to start pulling its weight. It’s just not clear that it is changing quickly enough to do so.