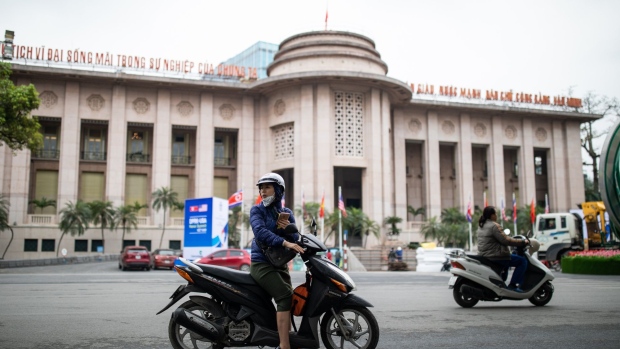 A woman looks back while sitting on a motorcycle in front of the State Bank of Vietnam in Hanoi, Vietnam, on Monday, Feb. 25, 2019. U.S. President Donald Trump and North Korean leader Kim Jong Un are scheduled to meet between Wednesday and Thursday in Hanoi for their second summit. Photographer: SeongJoon Cho/Bloomberg , Bloomberg

(Bloomberg) -- Vietnam’s central bank, in a rare tightening move, will raise two of its policy rates by one percentage point each from Friday after the local currency slumped to a record low.

The refinance rate will be increased to 5% while the discount rate will be raised to 3.5% starting Sept. 23, the State Bank of Vietnam said in a statement Thursday. The interbank overnight lending rate and the dong deposit rate cap will also rise, it said.

SBV’s move came hours after Prime Minister Pham Minh Chinh asked the central bank to consider raising interest rates to support the dong, which had fallen for a ninth straight day to 23,712 per dollar. That’s the lowest since at least 1993, according to data compiled by Bloomberg.

“This is in line with the trend of monetary tightening taking place globally; the currency has been weakening and inflation is under pressure,” said Phung Trung Kien, founder of Vietnam Holdings Inc., an investment consultant and asset management company. “All this has put more pressure on the central bank to hike this time.”

The central bank tightening would help the dong “gain ground” against the dollar, Quynh Cao, director of institutional sales at SSI Securities Corp. wrote in a note. The central bank “can also intervene by selling more dollars to help the dong,” Can Van Luc, chief economist at Bank for Investment and Development of Vietnam, said before the rate announcement.

The SBV, which had been mostly loosening its policy in the past decade, last cut the rates in September 2020 to support the economy through the pandemic.