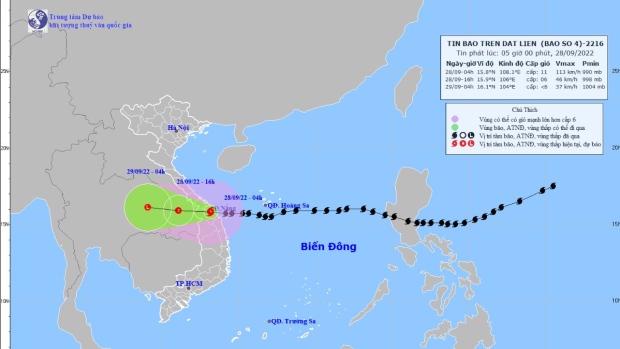 (Bloomberg) -- Typhoon Noru made landfall in Vietnam early Wednesday morning, knocking out power for more than 500,000 households and causing flooding and property damage along the country’s central region.

Noru’s eye struck the coast between Danang and Quang Nam at about 4 a.m. local time Wednesday, with gusts as strong as 117 kilometers (73 miles) per hour, according to the National Center for Hydro-Meteorological Forecasting. In the historic town of Hoi An, some streets were flooded and strong winds downed trees.

Authorities had earlier warned that Noru would be the strongest typhoon to hit the country in two decades, bringing heavy rain, wind, flash floods and landslides to Danang and at least eight of the country’s central provinces. Two of those, Gia Lai and Kon Tum, are in the coffee-planting belt. It also threatens to delay harvests in the world’s second-biggest coffee producer and top supplier of Robusta beans.

Binh Son Refining and Petrochemical JSC said its Dung Quat oil refinery, which was in Noru’s path, operated at 107% of its capacity through the storm, although it has temporarily suspended crude oil imports and fuel exports, according to a statement on its website. Its par Ten airports were asked to shut while curfews were imposed in Da Nang and at least three other localities. The military mobilized more than 260,000 soldiers and 3,380 vehicles to help locals prepare for the storm’s arrival.

The typhoon, also known as Karding, slammed the Philippines earlier in the week, shutting schools, workplaces and the country’s stock exchange. At least eight were killed, while over 52,000 people were displaced, according to national authorities Wednesday. Farm damage rose to 1.97 billion pesos ($33 million), the Agriculture Department said Wednesday, with rice accounting for 92% of the 114,446 metric tons of lost agricultural production.