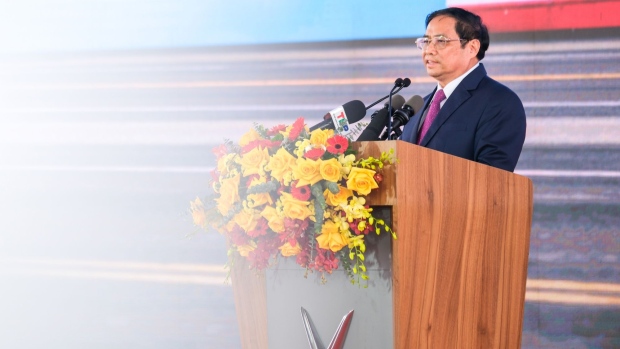 Pham Minh Chinh, Vietnam's prime minister, speaks at the loading ceremony for the first batch of VinFast LLC's VF8 electric vehicles for export at a port in Haiphong, Vietnam, on Friday, Nov. 25, 2022. VinFast, which said in July that it had signed agreements with banks to raise at least $4 billion to help its US expansion, has about 73,000 global reservations for its EVs, according to the company. It has secured about $1.2 billion in incentives for its planned EV factory in North Carolina, where it intends to start production in 2024, according to the auto manufacturer. , Bloomberg

The State Bank of Vietnam, which currently limits the credit growth of the banking system to 14% and has said it does not plan to increase that this year, has raised quotas for some banks. Lending in the banking system grew 12% this year through late November, Saigon Giai Phong newspaper reported last month.

The prime minister instructed the central bank and lenders to focus on supporting consumer and export sectors, according to the government website.

Chinh gave the orders Sunday while meeting with officials in the Mekong Delta province of Bac Lieu.

(Updates with credit growth in the second paragraph.)