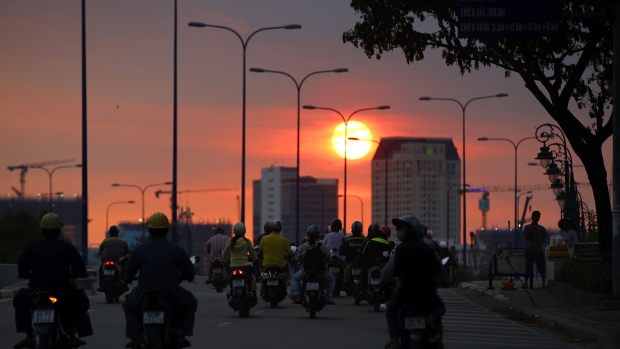 Motorcyclists travel along a road during sunset in Ho Chi Minh City, Vietnam, on Tuesday, Jan. 10, 2017. Vietnam's economy expanded more than 6 percent for a second year in 2016, defying a regional slowdown to remain one of the world's best performers as retails sales rose 10.2 percent. Photographer: Linh Luong Thai/Bloomberg , Bloomberg

(Bloomberg) -- The State Bank of Vietnam announced it is raising its credit growth limit for the banking system by 1.5-2 percentage points to boost economic growth as some companies struggle to obtain funding.

Banks with sufficient liquidity and relatively low lending interest rates will be granted higher credit quotas than others, according to a statement on the regulator’s website late Monday. Central bank Governor Nguyen Thi Hong directed lenders to prioritize lending to sectors that can help create momentum for economic growth, such as production, farming and exports.

The central bank will closely monitor banks’ lending and will take steps to help boost liquidity in the banking system when needed, according to the statement. The regulator will also closely watch inflation and market development to work out suitable monetary measures and credit growth limit for 2023.

--With assistance from Mai Ngoc Chau.