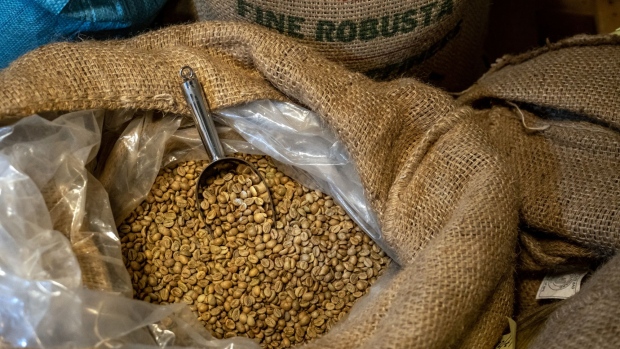 Coffee beans at a shop in Hanoi, Vietnam, on Tuesday, Aug. 30, 2022. Vietnam's vast hoard of coffee beans is shrinking, a phenomenon that’s set to push rising global prices even higher. Output from Vietnam, the world's largest robusta supplier and second-largest coffee producer, is also expected to drop in 2022-23. , Bloomberg

(Bloomberg) -- Vietnam exported over 1.73 million tons of coffee in the 2021-22 season that ended Sept. 30, its most since the 2017-18 harvest, according to Customs Department data compiled by Bloomberg News.

The data included adjusted export figures for Jan. to June this year that customs published on its website last month.

The nation’s 2021-22 coffee output is seen at 1.794 million tons, according to median estimates of 10 traders and exporters.

Some growers in the Central Highlands coffee belt began selective fruit picking this week with the start of a new season, said Nguyen Nam Hai, head of the Vietnam Coffee & Cocoa Association. Harvesting may peak in the second half of November, he added.

The association forecasts a 10% production decline in the 2022-23 season, according to Hai.