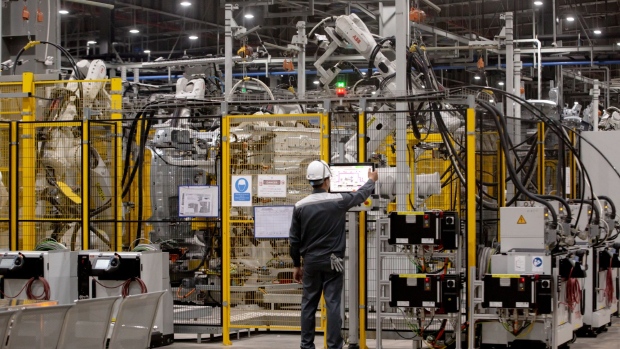 A worker handles robots on a production line at a VinFast LLC factory in Haiphong, Vietnam, on Saturday, Sept. 10, 2022. VinFast, an electric carmaker backed by Vietnam’s richest man, will ship about 5,000 vehicles to customers in the U.S., Canada and Europe early November and begin global deliveries a month later. Photographer: Yen Duong/Bloomberg , Bloomberg

(Bloomberg) -- Vietnam’s economy posted a double-digit growth in the third quarter, helped by a rebound in manufacturing and a lower base in the year-ago period.

Gross domestic product rose 13.67% in the three months ending September from a year earlier, the General Statistics Office said Thursday. That compared to a median estimate of 14.35% growth in a Bloomberg survey of economists, and a 6.02% contraction a year ago when the nation shuttered some factories as part of tough virus control measures.

Since then, the economy has rebounded as restrictions ended, domestic demand picked up and exports increased. The uptick in activity has been accompanied by a surge in consumer price inflation, which came in at 3.94% this month, the fastest in more than two years.

“Production and business activities grew strongly,” the GSO said in a statement. “Many industries have recovered strongly and achieved higher growth even compared to the time before the Covid-19 epidemic,” it said.

The nation’s benchmark stocks index rose 0.5% as of 10:59 a.m. local time, and looks poised to snap four straight days of declines. The dong slid 0.07% to trade at a record low at banks in Hanoi, according to data compiled by Bloomberg.

The central bank, which raised two of its policy rates by one percentage point each last week amid a slump in the nation’s currency, has said it will urge commercial banks to find ways to keep lending costs low to help businesses.

(Updates with chart, and sectoral performance details in box.)