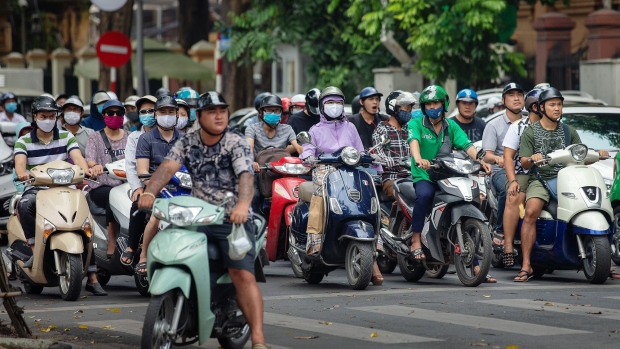 Motorcyclists with and without protective masks stand at a traffic signal in the old quarter in Hanoi, Vietnam, on Friday, May 29, 2020. Vietnam inflation cooled for a fourth consecutive month this year after the central bank reduced its policy rates to support an export-dependent economy. Photographer: Maika Elan/Bloomberg , Bloomberg

(Bloomberg) -- Vietnam’s economic growth accelerated in the third quarter as exports and manufacturing began recovering from the pandemic-induced slump of the first half of the year.

Gross domestic product rose 2.62% from a year earlier, up from a revised 0.39% in the second quarter, the General Statistics Office in Hanoi said Tuesday. The median estimate in a Bloomberg survey of five economists was for growth of 2.7%.

Other details from the report: