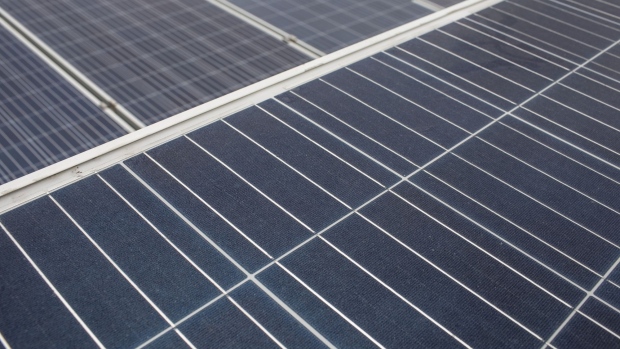 Photovoltaic panels stand on the roof of Irex Energy JSC's manufacturing facility in Vung Tau, Vietnam, on Monday, July 15, 2019. After U.S. President Donald Trump slapped higher tariffs on China, production in neighboring Vietnam went into overdrive. Chinese manufacturers, who face a 55% U.S. tariff on their goods, relocated some production to Vietnam, while local businesses saw a jump in orders. In June alone, U.S. imports of solar cells from Vietnam surged 656% from a year ago. Photographer: Yen Duong/Bloomberg , Bloomberg

(Bloomberg) -- Trung Nam Construction Investment JSC, a Vietnamese conglomerate, is considering selling a minority stake in its renewable energy assets, according to people with knowledge of the matter.

Trungnam Group, as it is commonly known, is working with a financial adviser to sell about a 30% to 35% stake in its portfolio comprised mainly of wind and solar projects, the people said. A deal could value the assets at more than $1 billion, said the people, who asked not to be identified as the process is private.

Deliberations are ongoing and there is no guarantee Trungnam will proceed with the potential divestment, said the people. A representative for Trungnam declined to comment.

Founded in 2004, Trungnam also has interests in construction, infrastructure, real estate and information technology, according to its website. Trungnam has 1.63 gigawatts of electricity contributing to the country’s supply as of October 2021. It is the only Vietnamese private enterprise involved in the power transmission process, the website shows.