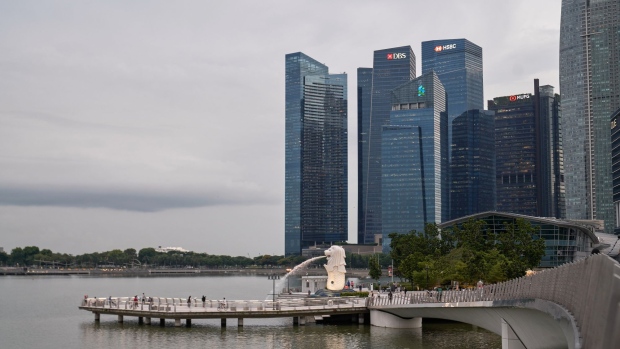 People at Merlion Park in the central business district of Singapore, on Wednesday, May 19, 2021. In the financial mecca of Singapore, technology companies have been steadily growing their footprint in recent years, chipping away at the dominance of banks in the island-state's central business district. Photographer: Lauryn Ishak/Bloomberg , Bloomberg

(Bloomberg) -- VinaCapital, a Vietnamese asset manager, is exploring setting up a blank-check company to list in Singapore next year, people with knowledge of the matter said.

The investment firm is working with an adviser on a potential initial public offering that could raise as much as S$250 million ($183 million), said the people, who asked not to be identified as the information is private. The company has held discussions with the regulator on the prospective offering, the people said.

VinaCapital would join the candidates seeking to be among the first to list a special purpose acquisition company in Singapore. Novo Tellus Capital Partners, Tikehau Capital and Vertex Holdings Ltd. are preparing to lodge their prospectuses as early as next week, Bloomberg News reported Thursday.

Deliberations are ongoing and there is no certainty that VinaCapital will proceed with the listing, said the people. A representative for VinaCapital declined to comment, while Quadria Capital didn’t immediately respond to requests for comment.

Any listings would benefit the island republic’s equities market, which hosted just eight first-time share sales so far this year, raising $1 billion in total, according to data compiled by Bloomberg. The biggest offering in 2021 comes from Digital Core REIT Management Pte, which raked in $600 million.

VinaCapital, founded in 2003, has about $3.7 billion of assets under management and 170 staff, according to its website. The company manages one closed-end fund listed on the London Stock Exchange, as well as several other open-ended and domestic funds.