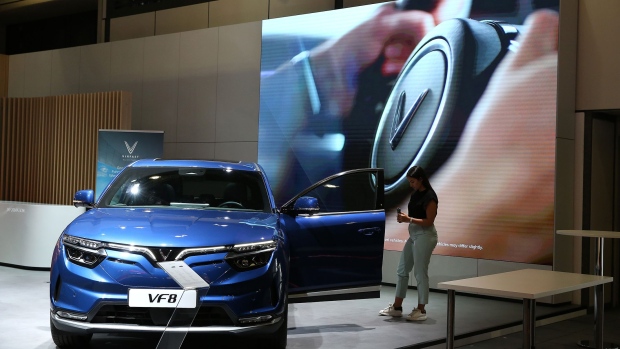 (Bloomberg) -- VinFast, an electric carmaker backed by Vietnam’s richest man, is shipping its first SUVs to the US, a milestone for parent Vingroup JSC that set out five years ago to bring high-end manufacturing to the Southeast Asian country.

Vehicles were loaded onto a red and white cargo ship emblazoned with VinFast in the northern port city of Haiphong. Nine hundred and ninety-nine EVs will be transported to California and then delivered to customers in late December, according to a VinFast statement.

Ahead of the ship’s departure, Prime Minister Pham Minh Chinh and other dignitaries attended a ceremony filled with patriotic music, performances by famous singers and speeches. The event underscored the importance of Vingroup’s effort to create a global brand for high-end products to the government. “These cars will bring Vietnam’s aspirations and pride to the world,” Chinh said.

The company, which faces intense competition from the world’s top auto brands, said in September it will ship about 5,000 vehicles to customers in the US, Canada and Europe this month.

The company is weighing a US initial public offering as early as January, Bloomberg reported earlier. VinFast said in July that it had signed agreements with banks to raise at least $4 billion to help its US expansion, including a factory in North Carolina.

VinFast said it has received 65,000 global orders for its VF 8 and VF 9 models, according to the statement.

(Updates the story with prime minister in the third paragraph.)