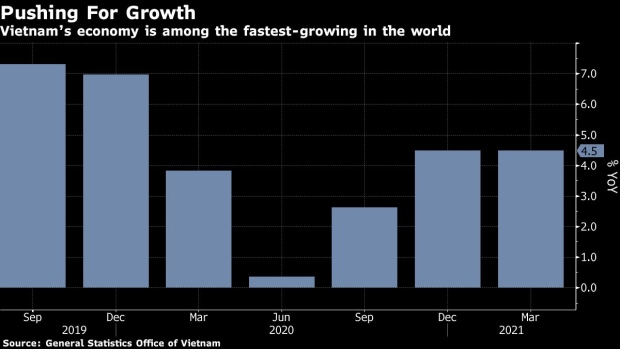 Nguyen Hoang Minh, deputy head of the State Bank of Vietnam in Ho Chi Minh City, said remittances to the city are forecast to reach about $6.5 billion this year, after rising 15% to a record $6.1 billion last year. The city, Vietnam’s economic hub, received about 50% of the country’s total remittance inflows in previous years.

“Remittances have surprisingly surged during the pandemic, and significantly helped us keep the dong stable,” Minh said in an interview. “Apart from rising remittances, increases in foreign direct investment and exports this year will also help ensure sufficient supply of foreign currency, facilitating our policies in helping businesses cope with impacts from the Covid-19 outbreak.”

The central bank said last month it will continue to pursue monetary policies that reduce borrowing costs for businesses and boost economic growth while keeping inflation in check. The government wants to make sure the country remains among the world’s fastest-growing economies, and expects 2021 growth to meet its goal of 6.5%.

The dong traded at 23,058 per dollar as of 10:24 am in Hanoi, little changed from 23,060 yesterday, data from banks compiled by Bloomberg show. The dong gained about 0.3% last year, when it was among the most stable currencies in the region.

“Interest rates will probably be stable this year as there is not much room to cut policy rates while inflation is picking up,” Minh said. The central bank, which aims to balance growth and inflation, is pushing for more flexibility on loan-interest payments to help businesses struggling in the outbreak, according to Minh.