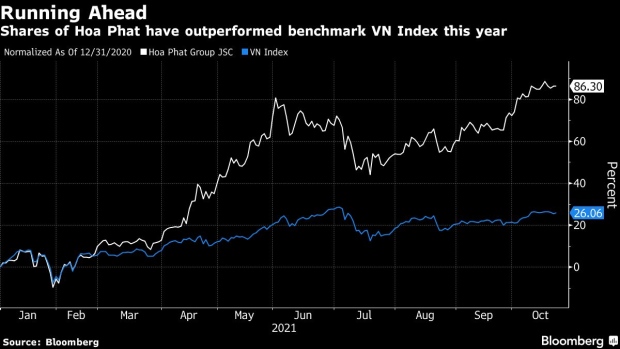 The drum of an LG Electronics Inc. washing machine is seen in the showroom of the company's factory in Changwon, South Korea, on Thursday, June 9, 2016. LG, with businesses spanning TVs to washing machines, is looking at home appliance acquisitions to fuel its global expansion and withstand a slowing smartphone market. Photographer: Bloomberg/Bloomberg , Photographer: Bloomberg/Bloomberg

Hoa Phat Group JSC targets revenue of $1 billion from the business by 2030 and aims to become the country’s biggest maker of home appliances, according to Chairman Tran Dinh Long. It will focus on products including air conditioners, refrigerators, water purifiers and washing machines, with 50% of production for export, he said.

“China has had two problems that have caused many large enterprises to shift production to other countries,” including Vietnam, Long said in an emailed response to questions from Bloomberg. China’s per-capita GDP crossing the $10,000 threshold along with the recent energy shortage are also adding pressure to costs.

Hoa Phat’s shares have surged 86% this year after more than doubling in 2020, making it Vietnam’s fourth-biggest listed company and the largest driver of gains in the nation’s benchmark VN Index. Its revenue for the first nine months of the year rose more than 60% from the year-ago period to about $4.65 billion.

The company has “abundant capital” to fuel its expansion, Long said, adding that it sees high demand for home appliances in Vietnam and other markets such as Europe, the Middle East and North America.