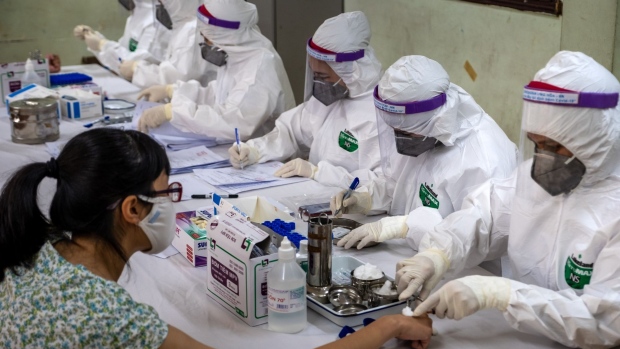 HANOI, VIETNAM - JULY 31: Medical specialists in protective suits collect blood samples for a coronavirus (COVID-19) rapid test from people who recently returned from Da Nang City on July 31, 2020 in Hanoi, Vietnam. As of July 31, community transmissions have spread from Da Nang city to five other cities including Hanoi & Ho Chi Minh City. With the 45 new cases, the largest number of domestic infections reported in one day in Vietnam ever since the first cases were detected in the country in February, the nation now has 509 Covid-19 patients. Of these, 369 have recovered and no deaths. (Photo by Linh Pham/Getty Images) , Photographer: Linh Pham/Getty Images AsiaPac

(Bloomberg) -- Vietnam will test all residents of Danang, the city at the center of a coronavirus outbreak with 1.1 million people, Tuoi Tre newspaper reported, as the risk of a widening spread increases.

There were two more confirmed cases linked to the Danang outbreak, the health ministry said on Sunday, while another two were imported infections. More than 800,000 people had traveled to the coastal city since July 1, and returned to their home provinces and cities, according to the government, while about 41,000 people had visited three hospitals there where most of the infections occurred.

The financial hub of Ho Chi Minh City recorded three cases after testing over 21,000 residents as of Sunday out of 32,000 who said they visited Danang in the past month, its center of diseases control said. Hanoi has quick-tested nearly 50,000 people who returned from Danang as of Saturday, according to the city’s government, which said an estimated 72,275 of its residents had been in the coastal city since July 8.

Vietnam has reported 174 new virus patients, mostly from Danang, since July 25 when the first locally-transmitted case was confirmed after more than three months. The Southeast Asian nation now has 590 virus cases, including 214 under treatment and three deaths.