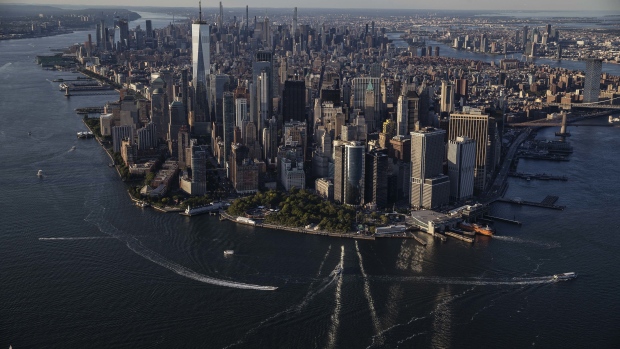 Buildings in lower Manhattan in New York, U.S., on Thursday June 17, 2021. New York state's pandemic mandates were lifted last week, after 70% of the adult population has now been given at least one dose of a coronavirus vaccine. Photographer: Victor J. Blue/Bloomberg , Bloomberg

The firm is in talks for more than 100,000 square feet (9,300 square meters) of space at 660 Fifth Ave., an office tower that’s undergoing a $400 million redevelopment by Brookfield Properties, according to people familiar with the matter. Discussions are ongoing and nothing is finalized, the people said, asking not to be named because the matter is private.

Viking plans to move from its current 280 Park Ave. location, where it has outgrown its roughly 60,000 square feet of offices, the people said. The new location would provide more space for its current team as well as new employees the firm plans to bring on. Like many funds, Viking increased hiring during the pandemic.

Last year, the firm began putting together a credit investing team as well as a fund to invest solely in private companies. Assets have jumped to $47 billion as of December, from $31 billion in January 2020. Viking has about 240 employees firmwide, a significant number of which are in Manhattan.

Representatives for Viking -- based in Greenwich, Connecticut -- and Brookfield declined to comment.

Manhattan’s office market is struggling to bounce back from the pandemic, which emptied out skyscrapers and sent the supply of available space soaring. Even so, several major finance and technology firms have been on the hunt for new, upgraded space to accommodate growing headcounts.

Ken Griffin’s Citadel has been exploring additional offices on Park and Madison avenues, while Blackstone Inc. is also looking at a major expansion in the city, Bloomberg reported earlier this year.

Last year was a tricky one for Viking: Its hedge fund posted its worst-ever performance, losing 4.5% after underestimating the impact of Covid-19 and making “bad bets,” the firm told investors in January. The fund fell an additional 8% in the first quarter of this year.