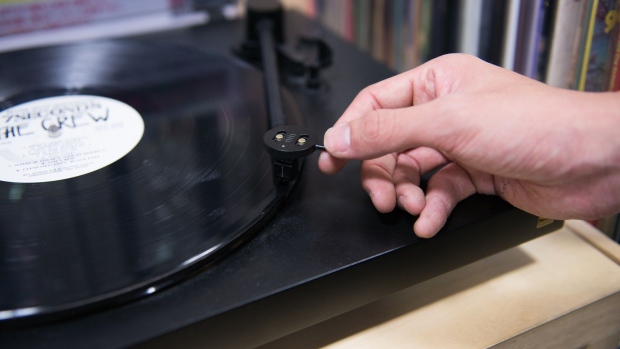 A member of staff plays a vinyl record at the HMV Record Shop operated by Lawson HMV Entertainment Inc. in the Shibuya district of Tokyo, Japan, on Wednesday, Sept. 28, 2016. Spotify Ltd. is bringing its popular online music service to Japan, a large and lucrative market where fans have demonstrated a continuing fondness for CDs and even vinyl records. , Bloomberg

Sales of vinyl records surpassed those of CDs in the U.S. for the first time since 1986, marking a key turning point for the format’s nostalgia-fueled resurgence.

People spent US$232.1 million on long-play and extended-play records in the first half of the year, according to the Recording Industry Association of America, eclipsing the US$129.9 million they spent on compact discs.

Vinyl was the most popular way people listened to music throughout the 1970s and the early 1980s, at which point it gave way to tape cassettes -- followed by CDs and digital formats. Each new format was more convenient than the last and suppressed interest in vinyl.

Yet vinyl sales have been rising since 2005, when they bottomed out at just US$14.2 million. Music fans value the higher-fidelity sound produced by vinyl and record players, which contrasts with the compressed files offered by most digital services. The top-selling LP in the U.S. last year was the Beatles’ “Abbey Road.”

Overall physical sales have fallen this year due to the coronavirus, which has stunted traffic to retail stores. CD sales fell 48 per cent in the first half of the year.

Even with the rebound, vinyl and all physical media are increasingly niche products. Streaming accounted for 85 per cent of music revenue in the first half, the RIAA found.