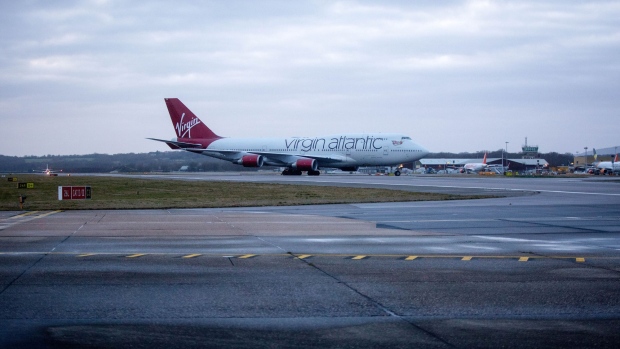 Virgin Atlantic Airways Ltd. will begin pitching to potential investors Monday as it seeks to avoid collapse with air travel effectively grounded and the U.K. government reluctant to provide emergency funding, a person with knowledge of the situation said.

The talks follow the U.K. carrier’s appointment of restructuring specialist Alvarez & Marsal to develop contingency plans for a so-called pre-packaged administration should it fail to secure financial backing, according to the person, who asked not to be named discussing private matters.

Virgin Atlantic Chief Executive Officer Shai Weiss will set out the company’s survival plans and strategy to 12 firms that have emerged as serious contenders for investment out of 100 originally sounded out by Houlihan Lokey, the person said.

The carrier founded by billionaire Richard Branson has enough cash to survive through the summer but is likely to have a better idea about its viability in the next week or two, including a bid to secure about 500 million pounds (US$620 million) in state support, according to the person. British Airways and EasyJet Plc have so far succeeded in tapping U.K. funding, but a special case would need to be made for Virgin because it lacks an investment-grade credit rating.

Virgin Atlantic declined to comment on the hiring of Alvarez & Marsal, which Sky News reported earlier.

“We are exploring all available options to obtain additional external funding,” a spokeswoman said. “Discussions with a number of stakeholders continue and are constructive, meanwhile the airline remains in a stable position.”

So-called pre-pack administration allows a business with a viable structure but unmanageable amounts of debt to make a fresh start.

Insolvency and turnaround specialist Wilson Field says on its website that the procedure must be deemed to be in the best interest of creditors. It involves the pre-arranged sale of assets from the insolvent company into a new firm which can have the same directors or be a completely separate party.

Assets must be bought at market value as determined by an independent professional valuer.

Virgin Atlantic said Tuesday that it would eliminate 3,150 jobs, or about a third of the workforce, shutter its London Gatwick hub and trim the fleet from 45 planes to 36 to help ride out the coronavirus crisis.

The U.K. government is due to hold a call with airline chiefs Sunday, though the focus is likely to be plans for airline passengers entering the country to spend two weeks under quarantine once flights resume, the person said.

Virgin hasn’t given up on winning British backing, and it’s not clear what impact multi-billion dollar aid packages granted this week to Air France-KLM and Deutsche Lufthansa AG, as well as the funding for BA, will have on government thinking, the person said.