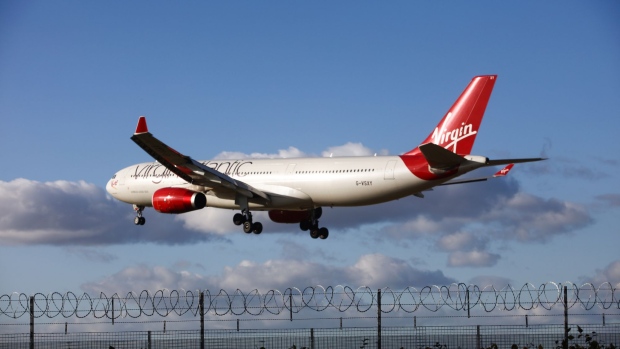 An Airbus SAS A330 passenger aircraft, operated by Virgin Atlantic Airways Ltd., prepares to land at Heathrow airport, in London, U.K., on Tuesday, Oct. 18, 2016. The U.K. government will decide next week whether to expand London's main airport, Heathrow, or its rival Gatwick putting an end to decades of prevarication over what has become one of the most contentious issues in British politics. Photographer: Chris Ratcliffe/Bloomberg , Bloomberg

(Bloomberg) -- Virgin Atlantic Airways Ltd. extended the suspension of its London-Hong Kong flights by almost seven months to late March due to “ongoing operational complexities” even as the Asian city gradually eases some of the world’s tightest Covid-19 restrictions and people start to travel once again.

The UK-based airline intends to resume the service on March 26, rather than the start of this September as previously planned. Customers who were due to fly between September and March can rebook, request a refund or convert their ticket into a voucher, Virgin said in an emailed statement.

Hong Kong has been largely closed off for much of the pandemic, with the government barring flights from countries including the UK for several months and also imposing mandatory hotel quarantine for as long as 21 days. While quarantine has been reduced to seven days and the flight bans have been lifted, along with a mechanism that suspended routes if an airline carried too many infected passengers, the city is far behind most of the world in reopening.

Virgin initially canceled flights from London Heathrow to Hong Kong on Dec. 21 as the omicron coronavirus variant swept through the UK. The carrier said it has also suspended cargo-only services and will review those “on an ongoing basis.” Heathrow to Shanghai passenger services remain suspended until March due to a ban on direct UK-China flights.

The conflict in Ukraine is also playing a part. With Russian airspace presumably continuing to be off limits into September, the flight time from London to Hong Kong would be an hour longer than normal, while the return leg would be extended by one hour and 50 minutes, Virgin said.

Hong Kong’s main carrier, Cathay Pacific Airways Ltd., has finally seen an uptick in traffic after its services were decimated by the government’s Covid rules. Its passenger numbers for June were the highest since March 2020, but the total of 150,077 was still about 95% lower than pre-pandemic levels.