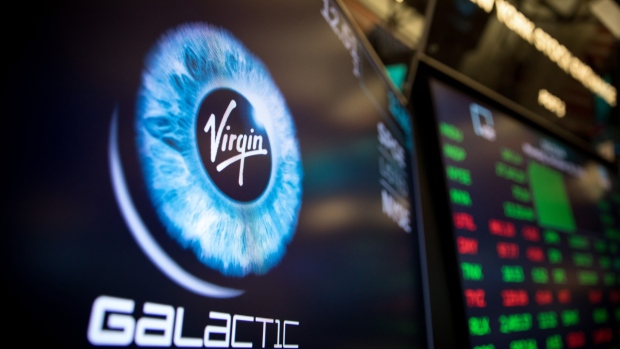 A seven-day surge in Virgin Galactic Holdings Inc. has lifted the stock four times above its level in December. Gains are snowballing, options traders are piling in, chatrooms are lighting up. It’s all starting to look similar to another space-age growth stock’s recent run.

Though the company is just a fraction of Tesla Inc. in terms of market value, the frenzy around its shares is similar. The average increase in Virgin’s share price has totaled more than 9 per cent since last Monday, and double-digit rallies have been propagating.

Virgin Galactic options activity has kept pace with the stock’s meteoric push, and may even be fueling it. As of 2:20 pm in New York Tuesday, call volume exceeded 360,000 contracts, which dwarfs the previous record set on Friday.

The notional value of calls that changed hands topped US$1 billion with several hours still left in the trading day Tuesday. The company came into the session with a market capitalization just over US$6 billion. For reference, the notional value of call options traded averaged about 0.5 per cent of its market value during the final five sessions of 2019 and first five of this year.

Derivatives that can extract even more gains from Virgin Galactic have become a favorite among retail investors, judging by activity on message boards like r/wallstreetbets. When a fresh option is written, a dealer who sells it will typically hedge their exposure by buying a certain amount of the stock so as not to accumulate a short position, and will tend to buy more shares in the event of a continued rally. Some traders have seized onto this dynamic as evidence that their options-buying activity is sufficient to perpetuate a rally in the underlying stock.

The recent activity is reminiscent of the euphoria that overtook trading in Tesla just a few weeks ago when FOMO trading in the electric car manufacturer overtook Google searches. While Virgin Galactic has yet to reach that level of retail excitement, more than 91 million shares traded hands on Tuesday. That’s the most since the company’s September 2017 public offering, more than 27-times the average volume, and dwarfs the activity seen in Tesla.

Even with the stock’s parabolic rise, bears have continued to pile in with more than 30 per cent of shares available for trading currently sold short, according to data compiled by S3 Partners. Bets that Richard Branson’s space-tourism company company goes bust stand in stark contrast to the market’s recent realization that betting against Elon Musk and Tesla hasn’t panned out. Roughly 15 per cent of Tesla shares available for trading are currently short, the lowest level in at least a year, data from S3 show.