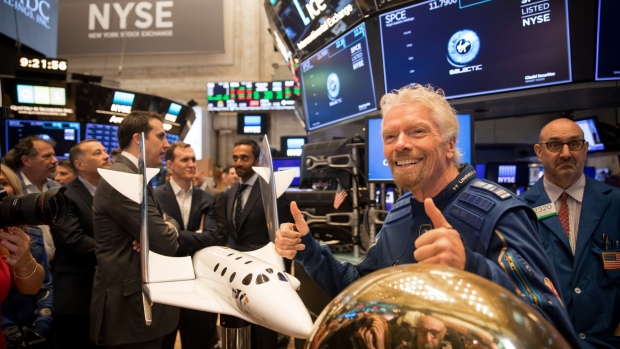 (Bloomberg) -- Virgin Galactic Holdings Inc. is a very sparse enterprise when it comes to the usual benchmarks, things like sales, profits or customers.

What Richard Branson’s space transport company does have, however, are hedge funds and other investors who are convinced it will establish a new space-tourism industry and fly people across continents at hypersonic speeds.

That unfettered enthusiasm is responsible for driving up Virgin Galactic’s stock by almost 200% so far this year, conjuring comparisons to Tesla Inc.’s meteoric rise. Virgin has more than doubled over an eight-day winning streak, hitting a high of $42.49 on Feb. 20 from below $7 in late November. That took its market value to almost $8 billion from $2.4 billion in early January. The stock took a breather in a couple recent sessions but rose by 1.2% even in Monday’s market crash.

At some point, Virgin Galactic could indeed become a very profitable company with near-daily space flights, high margins, a deep and affluent customer base and an early-mover advantage in the nascent field of crossing the Atlantic and Pacific in an hour or two via suborbital travel at hypersonic speeds.

Or, it could be out of business in, say, a year.

In November, Virgin reported a net loss of $51.5 million for the third quarter and $832,000 in sales. The company has about 600 customers who have each paid as much as $250,000 for a ticket to ride into space; it stopped taking reservations in December 2018.

The company reports fourth quarter and 2019 results on Tuesday and hosts its first conference call. Virgin Galactic Chief Executive Officer George Whitesides has said the company will begin customer flights this year, with Branson expected to be among those on the first commercial flight.

“Management has guided to a very attractive financial outlook a few years from now, but there are also a lot of thematic reasons to own it and I think that’s been the driver lately,” said Darryl Genovesi, an analyst with Vertical Research Partners, who has a “buy” rating on the stock.

The stock has attracted the attention of hedge funds, with three of them now holding more than 7% of the company’s outstanding shares, led by Suvretta Capital Management at 3.4%.

The stock surge has proved a huge financial win for Boeing Co., which invested $20 million in October ahead of the IPO for a minority stake. The money, invested through Boeing’s HorizonX Ventures unit, is aimed at furthering research into hypersonic travel, a key area of interest for the aerospace giant.

Even as shares peeled back more than 10% recently, bears have continued to ratchet up their bet to record highs. Roughly a third of shares available for trading are currently sold short, according to data compiled by S3 Partners. That indicates that skeptics think Branson’s company won’t reach its ambitious goals.

Those goals include increasing its spacecraft fleet to as many as five, expanding internationally to places like Italy, and then tackling the various technical, commercial and regulatory hurdles of point-to-point long-haul travel.

Virgin Galactic has the lead in the potential sub-orbital business of taking tourists on a brief joyride into space, said Steve Jorgenson, a general partner at Starbridge Venture Capital LLC and former hedge fund equities manager. But it lags in areas that can produce far bigger revenue.

“Everything else, from hypersonic point-to-point transportation to delivery of astronauts and cargo to destinations in earth orbit and beyond, are highly speculative,” he said.

--With assistance from Bailey Lipschultz.

To contact the editors responsible for this story: Brendan Case at bcase4@bloomberg.net, Larry Reibstein, Susan Warren