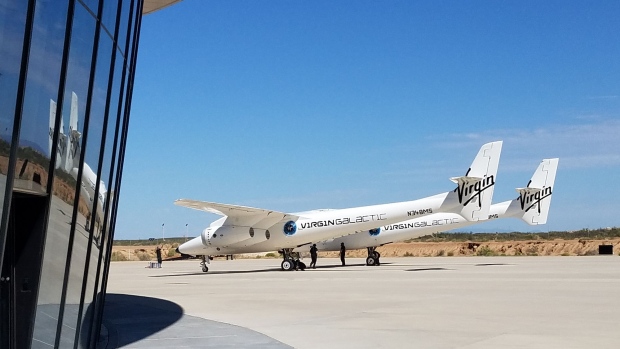 Virgin Galactic Holdings Inc. surged after the company announced a deal with NASA to develop private trips to the International Space Station.

Such “private astronaut experiences” could range from citizen expeditions to government-enabled scientific research missions, the company said in a statement Monday. Under its agreement with the National Aeronautics and Space Administration, Virgin Galactic will identify candidates interested in buying trips to the ISS while also arranging transportation and other resources.

The NASA pact extends Virgin Galactic’s efforts to develop space tourism amid the rise of a new industry based on private-sector launches. While the agreement doesn’t call for the company to transport astronauts on its own vehicles, the collaboration with NASA expands Virgin Galactic’s capabilities and validates its know-how in areas such as astronaut training.

“The agreement opens doors to a wider range of opportunities for Virgin Galactic beyond its core focus, including scientific and commercial space expeditions,” Morgan Stanley analyst Adam Jonas wrote in a note to clients.

Virgin Galactic rose 14 per cent to US$17.11 at 3:28 p.m. in New York after advancing as much as 18 per cent for the biggest intraday jump in two months. The shares have trended down since early May as billionaire Richard Branson pared his stake to raise cash for his ailing businesses in leisure and travel, including Virgin Atlantic Airways Ltd.

The Virgin Galactic deal demonstrates the U.S. government’s commitment to opening the space station to a broader set of users, Jonas said. Still, he said, the agreement isn’t likely to generate “material levels of revenue” for the company, which didn’t disclose the financial details.

NASA is seeing greater demand for use of the space station for scientific and technological research and development, international collaboration and commercial activity, Virgin Galactic said.

“We are excited to partner with NASA on this private orbital spaceflight program, which will not only allow us to use our spaceflight platform, but also offer our space training infrastructure to NASA and other agencies,” George Whitesides, Virgin Galactic’s chief executive officer, said in the statement.

Virgin is trying to develop a suborbital business of taking tourists into space on brief rides. Voyaging to the space station requires the ability to send rockets into orbit.

SpaceX’s bravado and reusable rockets have inspired other entrepreneurs. The competition could get fierce this decade as new spacecraft come to market from Blue Origin, the company founded and funded by Amazon.com Inc. founder Jeff Bezos, as well as from Northrop Grumman Corp., United Launch Alliance and Sierra Nevada Corp.