We wouldn't know about climate change if it wasn't for space: Space Capital's Chad Anderson

Richard Branson’s rocket ride last weekend went off without a hitch, but the billionaire’s space tourism company has a ways to go to convince investors it’s more than a moonshot idea.

Shares of Virgin Galactic Holdings Inc. fell every trading day since the space trip, erasing all the gains since early June in the worst week ever for the stock. By Friday, it was down 39 per cent for the five-day period.

While the successful launch was great marketing for space tourism, on Wall Street the enthusiasm quickly faded when Virgin Galactic followed it up with plans for a dilutive capital raise. That triggered a broader rethink of the timeline from Branson’s splashy first trip to a viable business based on would-be astronauts willing to pay a quarter of a million dollars to travel 53 miles above the earth.

“Now that Virgin has proven it can do what it set out to do, some of the speculative luster has come off,” said Mario Ferro, an analyst at investment research firm ValueLine.

The company’s plan to issue up to US$500 million in new shares would only modestly dilute its current float, but given it also sold stock worth over US$450 million last year, there’s concern that more share offerings will follow, Ferro said. The company has yet to book any revenue.

Investors were also let down when the company didn’t follow up Branson’s trip with an update on the operating plans, including exactly how much future tickets will cost or when sales will resume.

“There was certainly some disappointment among investors that there wasn’t any more of a material announcement, around either future revenue or opportunities, to support the growth story,” Canaccord Genuity analyst Ken Herbert said.

Representatives for Virgin Galactic declined to comment on the rout in the stock this week. 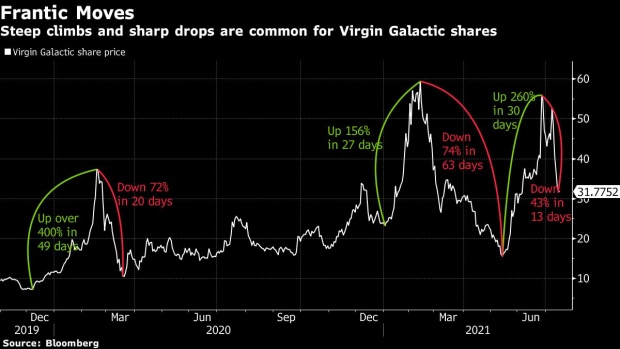 The company’s ultimate goal -- as laid out previously -- is to fly 400 trips per year from multiple spaceports that it plans to build, generating US$1 billion in annual revenue from each one. According to analysts polled by Bloomberg, Wall Street expects the company to turn a profit in 2024, with an annual revenue of US$385 million.

“In time, one would assume that economies of scale will be achieved, making the experience more accessible. But that is likely a long ways off,” ValueLine’s Ferro said.

In the meantime, the allure of a futuristic business plan, coupled with Branson’s charisma, ensures that the company has attracted a fan base among retail investors. The stock has risen more than 150 per cent since October 2019, when it merged with a blank-check entity to enter the public markets. That’s a double-edged sword, however, because a large retail investor base tends to come with volatility.

The extreme volatility seen this week may not last, but the stock can be expected to remain significantly more active than the broader market. After hitting a recent peak of 194 on July 8, Virgin Galactic’s implied volatility has fallen to 115, a hair away from its six-month average of 117. That number compares to a projected price swing of 52 for Tesla -- another growth stock that is often prone to sudden moves.

The latest planned share offering is likely to result in more swings since the company is selling directly to retail investors, a process that has been in vogue recently with several so-called meme stocks like AMC Entertainment Holdings Inc. and GameStop Corp.

Just about 23 per cent of Virgin Galactic’s outstanding shares are held by institutional shareholders, a number that contrasts with 57 per cent for Tesla Inc., 63 per cent for Amazon.com Inc. and 79 per cent for Walmart Inc. Those numbers portend more volatility until stickier money from institutional investors buys into space travel.

“Over time the company does need to find a way to attract more institutional investors and longer-term money, and as the business model matures that will start to happen,” Canaccord’s Herbert said.