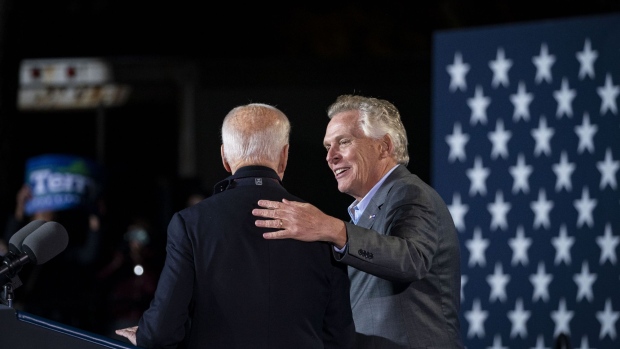 (Bloomberg) -- Whether Democrats pass President Joe Biden’s economic agenda won’t have an impact on the current Virginia governor’s race, but the outcome will say a lot about next year’s midterm elections with control of Congress in the balance, Republican pollster and strategist Frank Luntz said.

Speaking on Bloomberg Television’s “Balance of Power with David Westin” on Wednesday, Luntz was doubtful that Democrat Terry McAuliffe would get a boost in his race with Republican Glenn Youngkin if Congress passes Biden’s plan before Tuesday’s election. The White House is stepping up pressure on congressional Democrats to finalize at least the framework for a deal this week.

But Luntz said voter attitudes about Biden and former President Donald Trump “matter a great deal” because Biden’s approval ratings have fallen after he won the state by 10 percentage points last year, while McAuliffe and Biden have tried to link Youngkin to Trump.

Recent polls have shown the race to be tied after the lead McAuliffe held throughout the campaign wilted alongside Biden’s approval ratings.

And if McAuliffe, the former governor, loses or only narrowly wins a race in which he has the advantage and is expected to win, it will signal trouble for Democrats in the 2022 midterm elections because the results from Virginia governors’ races have historically been a key indicator of what happens in the follow year’s congressional elections, Luntz said.

“He should be winning the state by four or five, six points,” Luntz said. “So even a narrow one or two point McAuliffe victory will send shudders through Congress, through Capitol Hill and through the White House.”