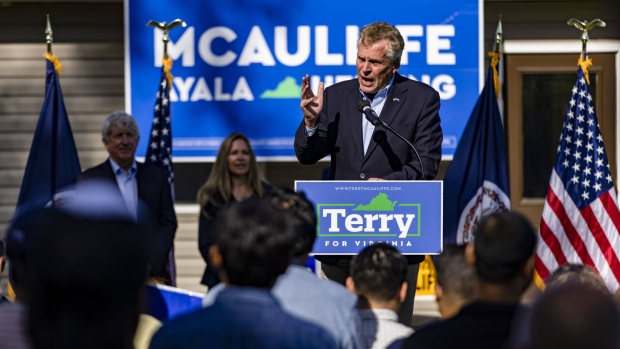 (Bloomberg) -- The race between Democrat Terry McAuliffe and Republican Glenn Youngkin for governor of Virginia has narrowed to a tie just two weeks ahead of Election Day, according to a new poll.

A Monmounth University survey released Wednesday showed both candidates with 46% support as Youngkin, the former co-CEO of the Carlyle Group Inc., has cut into McAuliffe’s once-sizable lead by drawing away independent voters and women.

Independent voters have flipped their support from McAuliffe to Youngkin, with 48% now supporting the Republican and 39% the Democrat. A month ago the advantage was reversed, 37% to 46%.

The race in Virginia is being closely watched ahead of next year’s midterm elections when Democrats will be defending their narrow control of both the House and Senate. President Joe Biden won the state by 10 points with support from the same suburban voters Youngkin is trying to peel off and both parties will be looking to see if his strategy works.

McAuliffe still has the advantage among female voters, 47% to 43%, but his lead has fallen sharply from the 14-point advantage he had in September, 52% to 38%. The poll has a margin of error of 3.1 percentage points.

“Suburban women, especially in Northern Virginia, have been crucial to the sizable victories Democrats have enjoyed in the commonwealth since 2017,” said Patrick Murray, director of the Monmouth University Polling Institute, in a statement. “However, their support is not registering at the same level this time around. This is due partly to a shift in key issues important to these voters and partly to dampened enthusiasm among the party faithful.”

Enthusiasm is much higher among Republican voters ahead of the Nov. 2 vote, 49% to 26%, even higher than a 13-point GOP lead in Monmouth’s September and August polls. The poll released Wednesday was conducted from October 16 to 19.