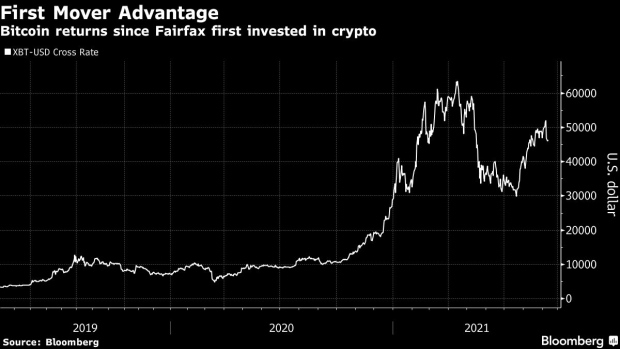 (Bloomberg) -- A couple of Virginia public pension funds that first dipped their toes into the world of digital assets by investing in venture capital two years ago are at it again, and this time they are making a more direct bet on cryptocurrencies.

The outlays come on the heels of the Fairfax funds -- which together manage about $7.15 billion -- investing several times in Morgan Creek Asset Management funds, and, earlier this year, in crypto venture firm Blockchain Capital. While some of these investments ended up going into coins like Bitcoin, the majority was invested into technology startups, so Fairfax considered them venture-capital investments. Parataxis, with its focus on actual coins, is different.

“We think that there’s going to continue to be volatility in crypto, and this is going to be good for value traders,” Katherine Molnar, chief investment officer for the police officers retirement fund, said in an interview with Bloomberg News. “It’s an area that’s going to grow in adoption and interest. We think that it’s inefficient enough, so we think there are some alpha opportunities to take advantage of.”

While many pension funds and endowments are exploring cryptocurrencies, few besides Fairfax have publicly announced they are jumping in. Regulatory uncertainty and high volatility of the coins have been partly responsible for the hesitancy.

But that same volatility can lead to outsized returns, which have been one reason for Fairfax’s expanded investment. Molnar’s $1.95 billion police retirement fund was planning for 2% exposure to crypto via Morgan Creek and Blockchain Capital, but at the end of June crypto accounted for 7% of assets, due to appreciation, she said. Although Molnar couldn’t discuss exact appreciation, crypto “was not an insignificant contributor to performance” in the second quarter, she said.

While in recent months some companies such as MicroStrategy Inc. have begun investing their corporate treasuries into Bitcoin, Fairfax doesn’t want to invest into coins directly, Molnar said -- partly because there are still too few data points to draw conclusions from on whether Bitcoin can be likened to gold, for example, she said.

“Three years ago we weren’t comfortable making a bet on which cryptocurrency will rise to the top,” she said. “And I am not sure we are comfortable yet doing that today.”

Parataxis was started in 2019 by Edward Chin, previously an investment banker at Michael Novogratz’s Galaxy Digital Holdings, and by Thejas Nalval, a former portfolio manager with digital-asset hedge fund LedgerPrime and head of asset management at the Element Group. Parataxis has about $55 million in assets under management, Chin said. The two Parataxis funds invest in everything from Bitcoin to derivatives to DeFi coins such as MakerDAO. It plans to launch another fund.

“This is our first pension fund,” Chin said in an interview. “We are in conversations with a couple more, and a couple of endowments as well. It’s clear that people are trying to get exposure.”