Fed to Make Some Sort of Taper Announcement in 2021: State Street

Having already dashed plans for Federal Reserve officials to meet in person in Jackson Hole this week, rising coronavirus cases are now limiting what Jerome Powell can say about what comes next for U.S. monetary policy.

The Fed chair will speak at 10 a.m. Washington time Friday and is expected to reinforce the message that it will probably be appropriate to begin scaling back the Fed’s US$120-billion-a-month bond-buying program by the end of the year.

But the abrupt change of conference plans -- the Wyoming gathering’s host shifted the format on Aug. 20 -- underscores the uncertainty officials face as they debate when to begin winding down the stimulus measures they rolled out last year at the outset of the pandemic.

“You don’t want to rush through tapering or rush into rate hikes when delta is still a threat, and there’s potential signs of some slowing in certain indicators at the moment,” said Brett Ryan, a senior U.S. economist at Deutsche Bank Securities in New York.

Minutes of their recent policy meeting in late July, published on Aug. 18, showed most Fed officials expected it would be appropriate to begin tapering the bond-buying program before the end of the year. Beyond that, opinions about the timing of interest-rate increases start to splinter.

The uncertainty and disagreement form the backdrop of Powell’s speech at this year’s conference, the theme of which is appropriately titled “Macroeconomic Policy in an Uneven Economy.” He will probably seek to emphasize that even if tapering does commence in the coming months, that doesn’t automatically put the central bank on a glide path to rate hikes in 2022.

“Powell has a committee with many different views, and what he is going to want to do is bring people together around a process whereby they retain flexibility to react in either direction, should they prove wrong on one of their forecasts,” Ryan said. 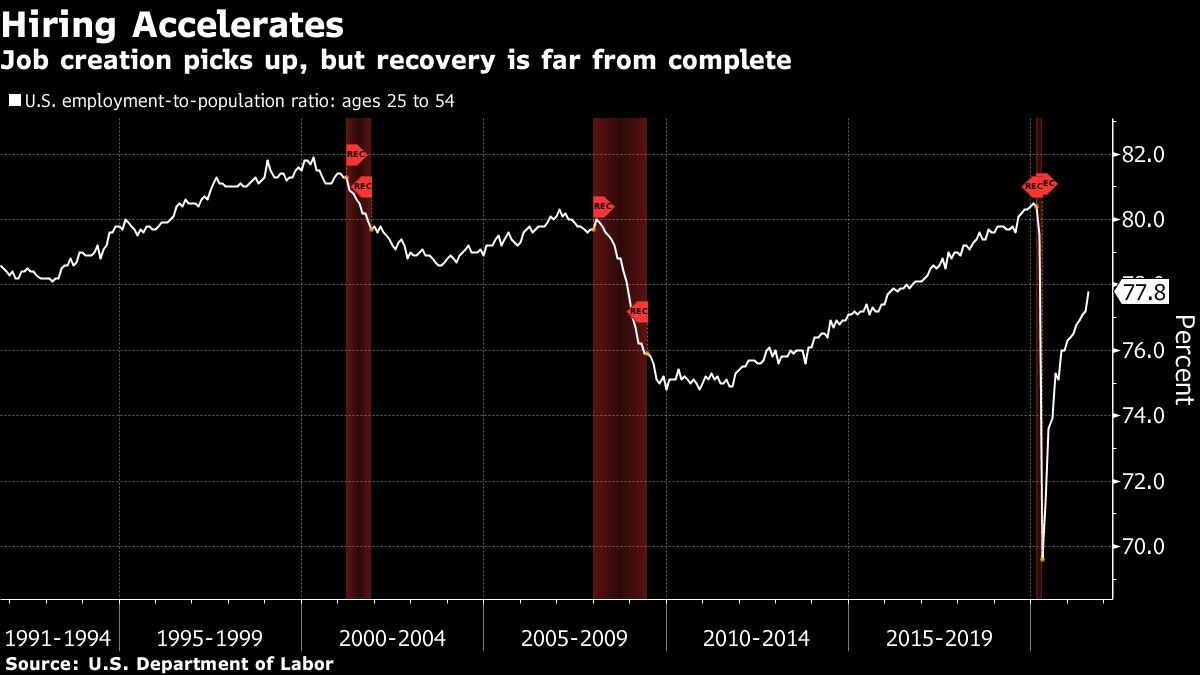 A few weeks ago, at the time of the July 27-28 Federal Open Market Committee meeting, the U.S. economy looked like it was roaring ahead. The Labor Department’s monthly jobs report, published a week later on Aug. 6, confirmed that view. It showed two months in a row of hiring around 940,000 in June and July, a pace that would quickly whittle away at the remaining shortfall of around 6 million jobs relative to pre-pandemic employment levels if it were to continue.

Now, there’s a bigger question mark hanging over the labor-market recovery, which is crucial to the Fed’s plans. Last year, during the Jackson Hole symposium, Powell unveiled a new framework for rate-setting that the FOMC would use going forward, itself the outcome of a nearly 20-month internal review.

What Our Economists Say …

“Bloomberg Economics expects the FOMC to tease the taper in its September statement; formally announce it in November; and begin reducing the pace of purchases in December. Net purchases should come to an end during the second half of 2022 -- well before the Fed lifts its policy interest rate off the floor.”

The new strategy dictates Fed officials allow the economic expansion to progress further than they have in the past before raising interest rates, to drive unemployment rates down faster and allow low-income groups to share in the benefits from a strong economy.

That also means allowing inflation to overshoot the central bank’s 2 per cent target for a time, to make up for periods coming out of downturns when it underruns the target. Powell will probably highlight both aspects of the new framework in his speech, which will mark the conclusion of its first year in action.

While job growth has picked up swiftly as vaccines have rolled out across the country and consumers have resumed high-contact activities, prompting mass rehiring in leisure and hospitality, the spread of the delta variant has put a damper on progress, according to Michelle Meyer, head of U.S. economics at Bank of America in New York.

Meyer watches aggregated BofA data on its customers’ debit-card and credit-card spending, which is deteriorating.

“In the last six weeks, there’s been a clear moderation in consumer spending,” she said. “Particularly leisure services spending -- so, airfare spending, lodging, cruises and entertainment -- and to some extent restaurants and bars, albeit less so. And the timing of that corresponded with the rise in Delta cases.”

The question is what kind of impact that might have on the next few jobs reports, which Fed officials will be consulting at upcoming FOMC meetings as they debate when to begin tapering the bond purchases.

Another factor to consider is whether the Delta variant will upend the return to school in the fall semester, which could also slow hiring by preventing parents without childcare options from returning to work, Meyer said.

On the other side of the Fed’s dual mandate is price stability. Inflation is now running well above the central bank’s 2 per cent target -- thanks largely to supply-chain disruptions that have pushed up the prices of specific goods like vehicles, as well as the burst of spending on the leisure services in recent months that is now moderating as the delta variant spreads.

The view at the Fed is that the current burst of inflation is largely transitory, and it will dissipate next year as supply chains normalize and reopening progresses. But several Fed officials are also citing hot price pressures as a reason to begin raising rates as soon as next year. And that brings some urgency to tapering the bond-buying program -- known as quantitative easing -- because ideally they would like to complete that process before rate hikes commence.

That leaves Powell, who is currently awaiting a decision from the White House on whether he will be reappointed when his term expires in February, walking a fine line. He and his colleagues have said they only need to see “substantial further progress” toward maximum employment to begin winding down QE.

“One of the things that Powell is going to really emphasize in this speech is that tapering conditions are very different than liftoff,” Ryan said. “He is going to want to make a big distinction between removing emergency policy measures like QE, versus tightening policy with the fed funds rate.”