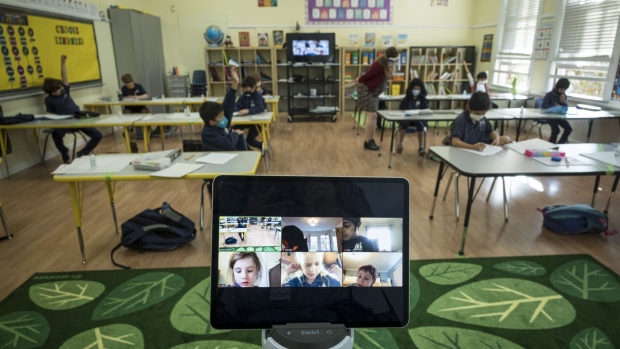 Bloomberg Best of the Year , Bloomberg

(Bloomberg) -- From the moment that Covid forced the closure of U.S. schools, warnings rang out about the toll on children from being shut out of the classroom. Now, as most school districts promise a full return in the fall, some are also surprisingly preserving the online option -- with the country’s two largest testing out contrary approaches.

New York City Public Schools, the biggest district with 1.1 million students, is sending students back to school with no alternative for remote learning, which Mayor Bill de Blasio says is “the way education was meant” as he’s promised “gold standard” classroom safety measures. Los Angeles Unified School District, which serves more than 600,000 students, is offering everyone in-person attendance with continued masking and Covid testing, but it’s also allowing students to log on from home if that’s what works for their family.

Smaller districts across the U.S. are likely to follow suit, trying to balance complex considerations of politics, logistics and parental fury. At stake is the well-being of both students and the nation’s economic recovery, with companies struggling to fill jobs as school shutdowns drive some parents out of the workforce. That’s been especially acute for women, with about 1.8 million leaving their jobs since the pandemic began.

Online schooling is “an expensive and difficult proposition,” said Julia Kaufman, a senior policy researcher at RAND Corp., whose research has shown disadvantaged children were more likely than others to be taught by remote learning -- and be chronically absent -- during the pandemic. “I’m hoping we tilt more to in-person.”

Virtual school created a range of difficulties for large chunks of the nation’s student body, ranging from poor connections and sinking academic performance to severe emotional distress from isolation. But a sliver of students thrived with added flexibility, prompting conversations among educators about the role of virtual school going forward.

One-third of schools surveyed in a RAND study plan to offer remote instruction to any student who wants it after the pandemic has passed, a major shift from pre-Covid. Nationally, about 2% of kindergarten to Grade 12 students are attending schools with no in-person option as of June 6, according Burbio, a website that tracks reopenings. About 70% are in schools with “traditional” setups, attending in-person daily, and the remainder are in some form of hybrid.

“There will be a role for virtual education, for Zoom, for remote instruction, as a supplement, not as a substitute,” said Randi Weingarten, president of the American Federation of Teachers, the nation’s second-largest teachers’ union, who has voiced a preference for full-time in-person by fall.

Gina Gray, a high school English teacher at Mervyn M. Dymally High School in Los Angeles, has been teaching virtually since the start of the pandemic. In April, she began teaching through a form of “Zoom in a room.” Her students have the option to come onto campus, but they still take their classes through a computer to avoid rotating classrooms. When campuses first opened, only two of her students showed up.

Gray’s school is predominantly Hispanic, and the vaccination rate in the community has stayed stubbornly low. Many of her students live in multi-generational households, or have younger siblings who are still ineligible, which has made them hesitant about returning, she said.

“We have to have options. Being the second largest district, we can’t assume a one-size-fits-all approach,” Gray said. “We have to honor the families that don’t feel safe sending their students back into the classroom in the fall.”

A return to in-person schooling also carries political and economic rewards. Women have dropped out of the U.S. workforce at a faster pace in states where most students are learning from home. Reopening would allow some of the parents on the sidelines of the labor market to re-enter, boosting the speed of the economic recovery.

The RAND study found schools that were fully remote for most of the year tended to serve higher percentages of students of color and more low-income children. Virtual students received less instruction and were more likely to have a failing grade in their classes, as of March data. Students of color, on average, could be six to 12 months behind in mathematics, compared with four to eight months for white students, according to a McKinsey & Co study.

Tazin Azad, a New York parent, was livid when she learned her children would not have the option to attend school virtually. “I think it’s totally offensive and highly negligent,” she said.

Her oldest son, in high school, benefited from the consistency of virtual school, and her middle child has received more one-on-one time with a counselor. Eliminating virtual school in the fall disregards those benefits, and is tone deaf to parents of color in the city who have elected to remain virtual at a higher rate than White parents, Azad said.

Azad’s experience appears different from the norm. A Department of Education report found nearly all students had setbacks to their mental health and well-being during the pandemic, partly due to a disconnect from services like counselors, as well as social isolation. Suicidal ideations rose among children, and disparities along racial and economic lines have only deepened, the report said.

Teachers also reported difficulties tracking attendance through computer screens. A May study from Tennessee Education Research Alliance found chronic absences spiked this year, particularly among students of color and those who are economically disadvantaged.

Ife Damon, a teacher in Staten Island, New York, has seen Zoom fatigue creep into her class. At the beginning of the year, students were much more participatory and there were more cameras on. As the school year draws to a close, she finds herself teaching to a growing number of empty squares.

“Some students log in, but then they are not present for the actual instruction. That’s part of the reason it’s time to go back,” Damon said.