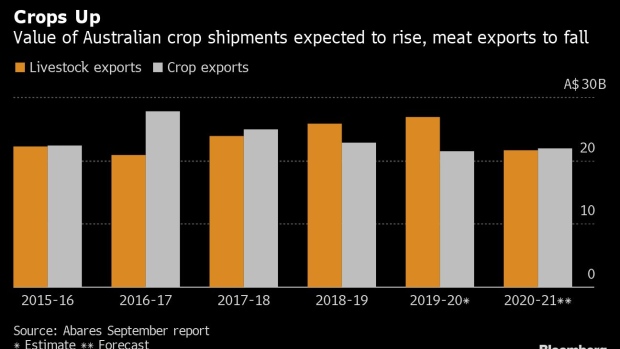 The value of Australian agricultural commodity exports is expected to slump by 10% in 2020-21, as the Covid-19 pandemic and trade tensions with China hit demand and prices, according to a report from government forecaster Abares.

“A combination of falling commodity prices, reduced livestock product exports and grain stock rebuilding is expected to result in a 10% fall in the value of agricultural exports to A$43.5 billion ($31.7 billion) in 2020–21,” Steve Hatfield-Dodds, Abares executive director, said in emailed comments. “The global economic outlook has deteriorated since the last outlook was issued in June and downside risks continue to dominate.”

Still, the value of crop exports is expected to edge higher, with the surge in output forecast to be far greater, as the country prepares for a bumper winter harvest after several years of drought. Meanwhile, livestock producers are holding back animals from sale and slaughter in order to rebuild their herds, lowering production and export expectations.

The total value of production is expected to remain steady at A$61 billion in the same period, as the higher crop production offsets lower livestock output, Abares said.

“The value of crop production is forecast to increase by 17% to over A$32 billion on the back of much improved seasonal conditions, particularly in New South Wales,” Hatfield-Dodds said.

Livestock production is expected to fall 14% to A$28.9 billion. “Almost every livestock category is forecast to fall in value in 2020–21 – apart from poultry and eggs, which will see modest rises,” according to the report.