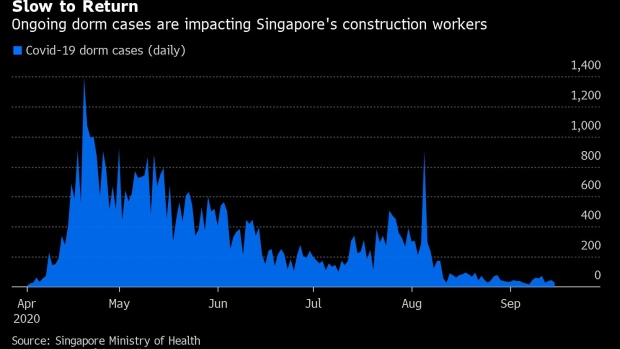 (Bloomberg) -- Singapore’s construction industry is bearing the brunt of ongoing virus cases at migrant worker dormitories, clouding the outlook for the city-state’s economy as it struggles to rebound.

Pockets of new infections continue to be detected in foreign-worker dorms, which had previously been declared cleared of the virus, and there have been some delays in getting routine virus testing completed. That’s resulted in a slower-than-anticipated return of workers to construction sites.

“We’d hoped to see more cranes swinging around and busier by September,” said Song Seng Wun, an economist at CIMB Private Banking in Singapore. “They are still taking baby steps to open up construction activities.”

The industry took a severe knock in the second quarter, when foreign-worker dorms were quarantined to curb the spread of the pandemic, with output plunging 59.3% from a year ago. The slow return of workers to their jobs means the government can’t bring forward public construction projects, which it typically does to give an immediate boost to economic growth, said Song.

Construction businesses like KTC Group are having to bear additional costs because of worker delays. When a project is postponed, it means the firm has to fork out extra money to extend the employment of other manpower such as field or site supervisors and the use of machinery, Chief Executive Officer Rajan Krishnan said.

“What you have is man and machinery idling on site,” he said. “Without the workers, work cannot be done.”

Selena Ling, head of treasury research and strategy at Oversea-Chinese Banking Corp., estimates the construction industry will contract 36.5% this year, a record decline.

“We basically wrote off the construction sector for the whole of this year already,” said Ling, who sees the overall economy shrinking about 5.5% in 2020.

The industry contributed 3.7% to gross domestic product last year, so the economy’s recovery is more reliant on what happens in the services sector -- which makes up about two-thirds of GDP -- and manufacturing.

Retrenchments and unemployment rates have spiked this year, but remain below the highs of previous recessionary periods, including the global financial crisis. Even so, economists and government officials warn that there’s more job-market pain to come.

“We still think the labor economic indicators are going to slide from here, at least through the third quarter, if not to the end of the year,” Ling said.