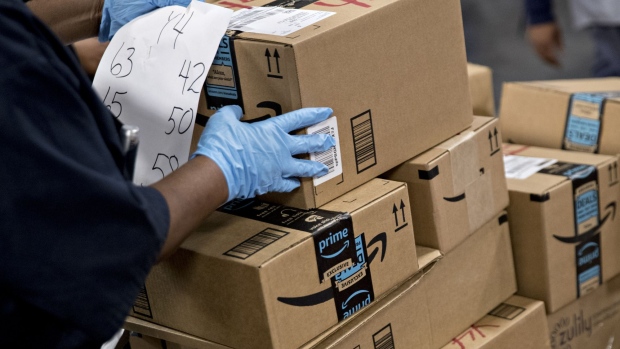 MONTREAL -- Shippers are in uncharted territory as the COVID-19 pandemic upends delivery patterns, with surging consumer demand mitigating a drop in corporate orders amid border closures and travel controls.

Residential deliveries have gone up at an "equal if not greater pace" than the drop in business-to-business parcels as house-bound Canadians order items online, Purolator chief executive John Ferguson said.

Hoarding of household items has fuelled the uptick.

"It also turned into people wanting to treat themselves, so they're still buying fashion apparel, for example," he said. "They want to maybe decorate a room now, since they're sitting at home all day."

Hospital shipments have also increased up to meet demand for additional medication and diagnostic equipment, "even COVID tests and disinfectants," he said.

Amazon Inc., the country's largest online retailer, said Tuesday it is hiring more than 1,000 workers in Ontario, British Columbia and Alberta to handle the spike in sales.

"The B2C, that's up," he said. But in terms of business lines, "that's not the lion's share of what these companies are doing."

"When you make the children stay home from school, a lot of people can't go to work. Those are the same people that drive the trucks and go to warehouses and do all the things we take for granted," Wulfraat said.

Supply chain disruptions have also tripped up the flow of goods.

"You've got ocean and air freight imbalances coming out of Asia," where industrial hubs such as Wuhan in China are starting to ramp up again, Ferguson said.

Empty roads and highways across Canada clear a convenient path for drivers, "but countering that are businesses that are shuttering or shortening their hours," the Purolator CEO added. "We have an internal mantra right now: Keep calm and ship on."

Teamsters Canada, whose truckers work for Purolator and UPS, said long-haul deliveries continue in spite of the economic downdraft.

"Based on the information we have -- and it's changing every minute -- the package delivery business is doing OK," said Francois Laporte, president of Teamsters Canada.

Meanwhile, Air Canada has started using its aircraft to operate cargo-only flights to Europe, with other flights planned for Latin America and South America.

The planes have no passengers, but instead carry time-sensitive shipments, including medical supplies, the airline said Wednesday.

The flights come as Air Canada slashes capacity in response to plunging travel demand due to government measures to stem the spread of the novel coronavirus.

The first cargo-only flights departed from Toronto for Frankfurt, London and Amsterdam this past week on Boeing 787 aircraft capable of carrying 35 tonnes of freight.

While overall courier shipment volumes remain steady, "the general economic forecasts are something that are going to impact all of us in the end and something we'll have to deal with," said Ferguson.