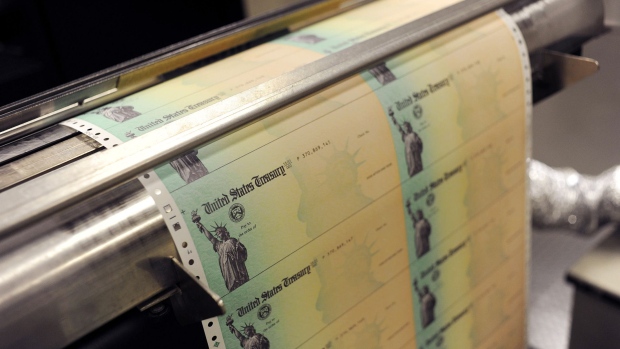 The U.S. Social Security trust fund could be depleted by 2030, five years earlier than the official government estimate before the coronavirus hit, because of the recession and long-term near-zero interest rates triggered by the pandemic.

The trust fund that pays retirement benefits would run out in a decade if the current economic downturn is as severe as the recession following the 2008 financial crisis, the Bipartisan Policy Center said in a report issued Thursday. Even under the most optimistic economic projections, the fund could run out of money by 2034, the report said.

“If policymakers fail to address Social Security’s financial imbalance soon, they will be left with only drastic solutions or financing a portion of promised retirement benefits through general revenues,” according to the report. “Tax increases will be sharper, benefit cuts will be more severe, and the cohorts of workers who bear these changes will have less time to plan their finances accordingly.”

Prior to the pandemic, the Social Security Administration had estimated the the Social Security trust fund would be depleted by 2035. At that point, payroll taxes and other income would cover only about 79 per cent of program costs, meaning that the government would need to raise taxes, cut benefits or pull revenue from other sources.

There have been several dire warnings about the pandemic’s effect on the long-term solvency of the popular retirement benefit program. The Congressional Budget Office in September estimated that the funds would be depleted by 2031.

Though payroll taxes ostensibly go to funds that build up assets from which the benefits are paid, the demographic challenge posed by the large, rapidly retiring baby-boomer generation means there’s not enough money for the government’s obligations.

President Donald Trump has said if re-elected he would move to eliminate all payroll taxes, which pay for Social Security, disability and Medicare benefits. Repealing those taxes would mean the government would only be able to send Medicare and disability payments for several months and retirement benefits for a few more years.

That’s unlikely to happen, even if Republicans were to control both chambers of Congress. Senior Republicans have rebuffed Trump’s calls to temporarily cut payroll taxes, saying that would harm benefits that many elderly Americans rely on.