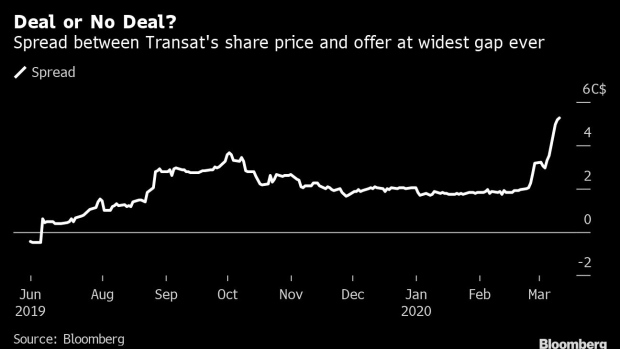 (Bloomberg) -- The coronavirus turmoil has ensnared a stock that should have been somewhat immune: Transat A.T. Inc., the tour operator and airline carrier Air Canada agreed to buy months ago.

The gap between Transat’s share price and Air Canada’s takeover bid -- which shareholders endorsed in August -- has grown to $5.25 a share, suggesting investors are questioning whether the C$720 million ($523 million) deal will happen. Transat’s stock closed at C$12.75 on Wednesday, 29% below the agreed price of C$18 in cash.

The discount has widened in the market meltdown over the virus, which has hammered the outlook for airlines. Transat said Thursday that since Feb. 24, daily bookings have been lower than last year and it could not provide an outlook for the second quarter or the summer travel season.

Transat spokesman Christophe Hennebelle said there’s nothing new about the transaction and pointed to the slump of airlines and tourism stocks. The takeover is still pending regulatory approval.

In theory, the outbreak and its impact on Air Transat could give Air Canada room to wiggle out of the deal, though it may be a hard point to argue, according to Dan Fong, an analyst at Veritas Investment Research. The agreement lets the buyer terminate the purchase under certain circumstances described as “material adverse effect.”

“The coronavirus’ impact on travel clearly has an adverse effect on Transat’s operations,” Fong said in an email. “However, the language in the agreement effectively says that material adverse effect must disproportionately affect Transat relative other companies operating in the same space.”

Goldman Sachs Group Inc. analyst Noah Poponak estimates global air traffic will drop 7% this year. Airlines have announced plans to cut capacity as travel restrictions expand, with some withdrawing earnings guidance for the year. Air Canada shares are down 44% since the beginning of the year. Transat has lost 20%.

Shareholders voted 95% in favor of the Air Canada bid on Aug. 23. The companies have been expecting the acquisition to close next quarter.

Re-opening discussions would be hard at this advanced stage, according to Chris Murray, an AltaCorp analyst. While there’s still uncertainty on what competition authorities will say, there’s no obvious reason that could derail the deal, he said.

“In the grand scheme of things it’s a viable transaction, I think, for Air Canada,” he said. “Can they afford to do this, is it possible to do this? Yes, I think it will be fine.”

--With assistance from Doug Alexander, Scott Deveau and Divya Balji.

To contact the editor responsible for this story: Derek Decloet at ddecloet@bloomberg.net