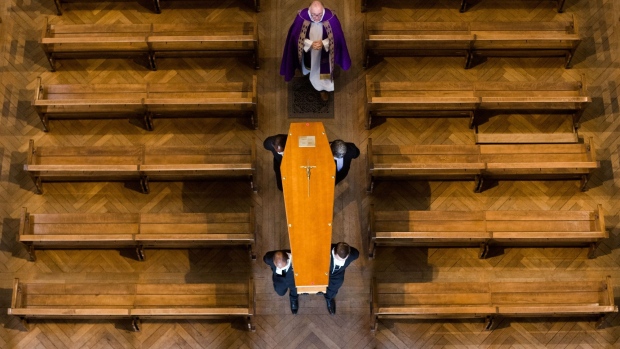 A priest walks behind pall bearers carrying a coffin during the funeral service of a coronavirus victim on April 16, 2020. Photographer: Nathan Laine/Bloomberg , Bloomberg

It’s one of the strange new realities of this deadly pandemic: The funeral industry, of all things, is getting crushed.

In fact, business is so bad that funeral directors worry it might never fully recover.

The reason: For many, Covid-19 has made large, traditional funeral services a thing of the past, at least for now. Even before the virus struck, funeral homes were struggling to cope with changing tastes.

The shift has hit hard at Service Corporation International, the largest U.S. provider of funerals, cemeteries and cremations with more than 1,900 North American locations.

In an April 30 earnings call, Chief Executive Officer Tom Ryan said average funeral sales -- which in pre-pandemic times might have included a viewing, full service, bronze casket, lush floral display and tchotchkes such as urn pendants -- fell 11 per cent last month compared with a year ago.

Sales to consumers buying plots in advance of death dropped more than 35 per cent.

“Through February and the first part of March, we had a lot of great momentum in the business,” Ryan said on the call. “Then we all know what happened: Covid-19 and the ripple effects.”

The viciousness of Covid-19, with the U.S. death toll topping 100,000, is upending cherished traditions in the US$16.3 billion death industry.

Funerals where hundreds once mourned now offer a sad tableau of 10 family members at a grave site or cremation mausoleum.

Satin-lined caskets carrying price tags of US$10,000 or more are replaced by US$300 cremation urns ordered online. Drive-by and video viewings are required in these socially distanced times. 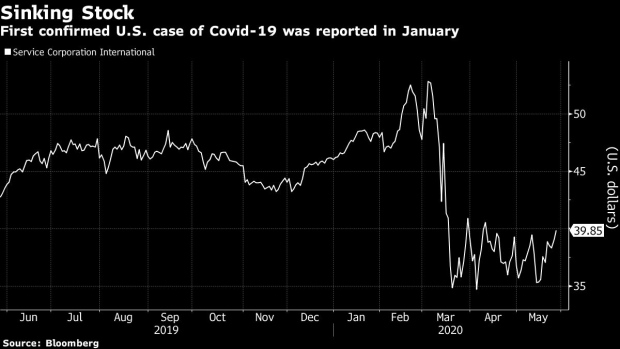 All this may become the norm for the nation’s more than 19,000 funeral homes as generational changes influence customs: Younger people are opting for cremation or eco-friendly “green burials” that cost far less than traditional obsequies.

Cremation rates now may be as high as 80 per cent in some parts of the country where they’ve historically been less than 50 per cent, according to Barbara Kemmis, executive director of the Cremation Association of North America trade group.

“There’s no question we’re all losing money,” said Robert Kugler, a funeral-home manager in Saddle Brook, New Jersey, who has been in the business for 36 years and doubles as the township’s police chief. “The question is: Will it come back when this is all over? Nobody knows the answer at this point because it’s a long way from over.”

Mourners may continue to be reluctant to attend wakes and religious services, fearing Covid-19 will turn a house of worship or funeral home into a hot spot. That’s exactly what happened after a February funeral in Albany, Georgia, that drew more than 100 friends and relatives.

Days after the service, some attendees became ill, as did employees of the funeral home, and one man died. The virus spread rapidly through the city, located about 180 miles south of Atlanta.

Another drain on funeral-home resources is the need to provide face masks, heavy gloves and protective clothing for workers handling bodies, Kugler said -- even though they often don’t know if the death was caused by Covid-19.

One entrepreneur who’s benefited from the changes is New Zealander David Lutterman. His business transitioned from live-streaming corporate annual meetings to funeral services, and he’s adding staff in his Houston-based U.S. office to keep up with surging demand.

“I don’t know if the traditional funeral forms will ever return,” he said.

Even if they do, they may be very different.Before she died of cancer in March, Irene Kipreos, the locally well-known former owner of Fat Boy restaurant in Smyrna, Georgia, asked for a traditional Greek Orthodox funeral -- with 200 mourners packing the church.

Instead, she got 35 people spaced out among the pews, said Pam Kipreos, her daughter-in-law. “She wanted a Big Fat Greek Funeral, and we couldn’t give it to her.”