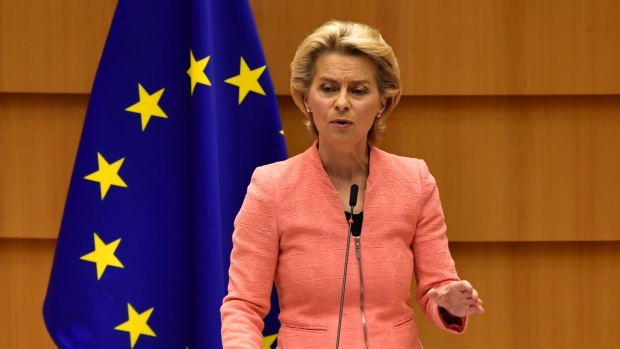 Ursula von der Leyen, president of the European Commission, delivers a State of the Union address in the European Parliament in Brussels, Belgium, on Wednesday, Sept. 16, 2020. , Bloomberg News

European Commission President Ursula von der Leyen left a leaders’ summit in Brussels after a member of her staff tested positive for COVID-19, highlighting how the virus has disrupted policy planning across the continent.

The head of the European Union’s executive arm said in a tweet that she herself has tested negative for the infection but will nevertheless be self-isolating immediately. Her abrupt departure came as EU leaders were discussing the stalemate in the negotiations with the U.K. on a post-Brexit trade agreement.

I have just been informed that a member of my front office has tested positive to COVID-19 this morning. I myself have tested negative.

However as a precaution I am immediately leaving the European Council to go into self-isolation.

It’s the second time in as many weeks that von der Leyen has isolated after coming into contact with an infected person, this time only after she was in the same physical place with the rest of the continent’s leaders. Already one member of the commission has tested positive for COVID, and several others have been forced to quarantine.

The pandemic forced EU leaders to switch from in-person meetings to video-calls in March, on the back of a continent-wide lockdown to limit the spread of the disease. The change was singled out as a reason for failing to reach an agreement on a jointly financed recovery package until early July, partly because video calls were more susceptible to press leaks and because leaders weren’t able to conduct bilateral meetings.

Normal summits resumed in mid-July with a triumphal deal on a 1.8 trillion-euro ($2.1 trillion) EU budget and recovery fund, while the sharp drop in infections over the summer sparked rampant optimism that the worst of the crisis was behind. Enthusiasm soon gave way to a new flare up in infections, coupled with a deadlock in talks with the U.K. over a trade deal, and constant delays in negotiations over the details of the economic recovery package.

A summit of EU leaders last month had to be postponed because Charles Michel, who chairs the meetings, also had to go into isolation. Plenary meetings of the European Parliament in Strasbourg have also been rescheduled to be held in Brussels, or online, due to the fear of spreading the virus.

Very glad to meet @antoniocostapm.
We'll work together to make the best use of #NextGenerationEU funds.

But we act already now to save jobs - 🇵🇹 will soon receive €5.9 billion under SURE to keep people in work. pic.twitter.com/2afXInFdBv