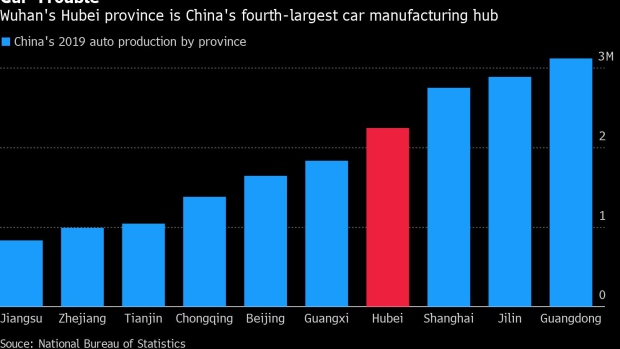 (Bloomberg) -- Nissan Motor Co. is bracing for potential disruptions in plants as far away as the U.S. because the coronavirus epidemic in China is leading to a parts shortage and wreaking havoc across the supply chain, people familiar with the matter said.

The Japanese carmaker procures more than 800 parts from factories in the outbreak epicenter of Hubei to make cars worldwide and is concerned that most of those components — ranging from brake hoses to air conditioning controllers — will run out if plants in the province stay idled beyond Feb. 21, when the government has signaled that production could resume for most companies, according to one of the people, who asked not to be identified discussing a private matter.

The shortage could lead to some Nissan car output in Japan to be suspended as soon as Feb. 23, followed by Malaysia soon after, the person said. Further delays could mean plants in the U.S., U.K., India, Mexico, Russia and Spain also have to stop production, the person said.

Nissan’s woes provide a glimpse into the challenges that have arisen since China locked down Hubei, the country’s fourth-largest vehicle-manufacturing hub. Cars comprise about 30,000 parts — roughly 100 times what goes into a phone — making automakers and their supply chains particularly vulnerable to cataclysmic events such as the coronavirus outbreak and the 2011 earthquake in Japan. Researcher IHS Markit estimates the epidemic could cut vehicle output by more than 1.7 million units. That’s more than what industry leader Volkswagen AG produces globally in any given month.

Nissan closed part of its production line in Kyushu, southwest Japan, on Feb. 14 and 17, and will also halt output on the 24th. Azusa Momose, a spokeswoman for the Yokohama-based automaker, declined to comment on any future factory plans that haven’t been announced.

Meanwhile, Hubei continues to be locked down, particularly in Wuhan, where the virus was first detected. The municipal government announced Feb. 13 that all factories in Hubei would be shut until at least Feb. 20. The province is home to Nissan’s Chinese partner, Dongfeng Motor, making the Japanese carmaker more vulnerable to the disruptions than most others.

The province is quarantining tens of millions of people, mandating that citizens self report their body temperature and conducting house-to-house searches on people showing symptoms of the virus. The measures have coincided with some easing in the number of newly reported cases in Hubei, where the outbreak began and most infections and deaths have occurred.

For Nissan, the epidemic adds to the turmoil engulfing the company still reeling from the shock arrest of former Chairman Carlos Ghosn in late 2018. Even before the coronavirus began grabbing international attention, the maker of Altima sedans posted its lowest profit in a decade and the company’s shares were slumping near levels last seen during the global financial crisis.

At home, the Japanese carmaker is in discussions to scale back production by about 6,800 units during the final week of February, with more reductions likely if the shortage of parts persists, the person said.

Nissan has been asking the Chinese government to let companies resume production of idled plants in the country as long as they put adequate safety measures in place, according to the person. It had some success on Monday when it restarted a plant in Guangzhou, near Hong Kong, and the company is planning to resume other operations in China after Feb. 21.

A Nissan survey of its suppliers in China found only 58% responded that they were able to resume production by Feb. 10, with the others saying they were unable to do so because they failed to get the necessary government approvals, according to the person. Among suppliers who restarted output, only about half were able to get a majority of staff into work, the person said.

To contact the editors responsible for this story: Young-Sam Cho at ycho2@bloomberg.net, Reed Stevenson, Craig Trudell