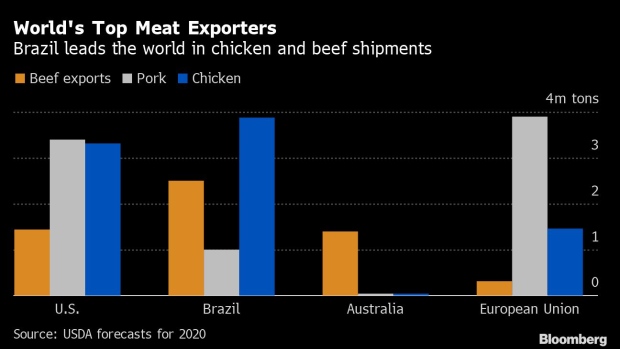 (Bloomberg) -- The coronavirus outbreaks that shuttered U.S. meat plants are spreading to other industry powerhouses from Europe to Brazil.

So far, the supply disruptions haven’t matched the burger shortfalls and soaring prices seen in the U.S. That’s partly because abattoirs outside America tend to be smaller, damping the market impact when one is halted. But as slaughterhouses become virus hotspots, they’re attracting greater scrutiny and more plants are being shut.

In Europe, one Irish beef plant has closed, while German authorities blamed working conditions and crowded seasonal staff accommodation for virus outbreaks that shut two facilities. That prompted criticism from German Chancellor Angela Merkel, who said the situation was “alarming.” In Brazil, meat giants BRF SA and JBS SA were each ordered to close one plant as a surge in infections is investigated.

“Brazil is not immune to the pandemic,” said Lorival Luz, chief executive officer of BRF, the country’s largest chicken and pork exporter. “Depending on measures taken by local authorities, we may see some difficulties that may lead to a supply shortage.”

While a handful of companies dominate the U.S. industry, the top 15 producers in the European Union only account for less than a third of output. That minimizes the impact when shutdowns occur. And in contrast to the U.S. feedlot system, cattle in Brazil are fattened across extensive pastures, requiring a higher number of smaller abattoirs near farms.

“The scale issue is a sort of mark of the size of the U.S. industry,” said Justin Sherrard, a global animal-protein analyst at Rabobank Group. “It also creates a certain vulnerability under this pandemic situation.”

Processors in Europe have also cut back operations during the pandemic because of sluggish meat sales and shuttered restaurants, said Karsten Maier, secretary general at the European Livestock and Meat Trades Union.

Infection rates at meat plants partly reflect government policies to both tackle the virus and restart economies. In the U.S., the coronavirus spread at more than twice the national rate in counties with major meatpacking plants in the first week after Donald Trump ordered them to reopen. His Brazilian counterpart, Jair Bolsonaro, has railed against virus containment efforts adopted by local authorities, even as the country’s death toll surged to a record.

For the moment, Brazil’s meat industry is still largely operating at a normal pace. Companies took early measures to reduce contamination, such as curbing groups in cafeterias, distributing masks and boosting disinfection.

“We enhanced the protection equipment used by all employees,” Ticle said. “They look like astronauts going to work.”

Social distancing is also easier at more automated plants, such as those in Russia, where the bulk of investment was made over the past 15 years, said Anastasia Mikhailova, a spokeswoman for producer Cherkizovo Group.

Still, Ros Agro Plc expects the virus to only peak in some Russian regions in late May, making it too early to say whether the nation’s meat plants will be affected, said CEO Maxim Basov.

Australia, a top red-meat exporter, has only had one slaughterhouse virus cluster so far, after 62 cases were linked to the Cedar Meats sheep-meat facility near Melbourne. The plant has been closed for two weeks for deep cleaning and all 350 workers have been tested for the virus.

The country probably won’t see outbreaks like those in the U.S., according to federal Agriculture Minister David Littleproud, who praised the industry for being proactive on social distancing and hygiene. Still, labor unions are calling for processors to strengthen health and safety protocols.

For the moment, nowhere has experienced an impact like the U.S., where more than 30 meat workers have died of Covid-19 and at least 30 plants have closed at some point in the past two months.

In Ireland, 556 workers in 10 meat-processing facilities tested positive as of last week, the nation’s health department said. The death this month of a worker from a poultry producer in Northern Ireland prompted the Unite labor union to ask processors to temporarily close facilities with outbreaks.

Authorities in Germany’s leading livestock states of Lower Saxony, Schleswig-Holstein and North-Rhine Westphalia have ordered virus testing of meat-plant workers. On May 8, state officials ordered the closure of Westfleisch’s Coesfeld plant, with more than 250 workers infected. Vion also closed a slaughterhouse in Bad Bramstedt in Germany this month, after some workers were found to be infected.

“I am not pleased with what we have seen here,” Chancellor Merkel said on Wednesday.

One sector that resembles the scale of meat plants in the U.S. is Brazil’s poultry industry. The nation’s facilities are enormous -- slaughtering as many as 500,000 birds a day and requiring 2,000 or more workers.

Processors were initially reluctant to share information and adopt official recommendations, said Priscila Schvarcz, a prosecutor in Rio Grande do Sul, where the two Brazilian plants were shut. Six companies, including BRF, have since signed up to protocols to curb the virus’s spread, according to Schvarcz.

“What a lot of people are looking at in the meat industry is what’s happening in Brazil, because Brazil’s such a big supplier to the whole world,” said Max Green, a livestock and meat analyst for IHS Markit in London. “If they have a serious hit to their production, it would have more of an impact to global meat supplies.”