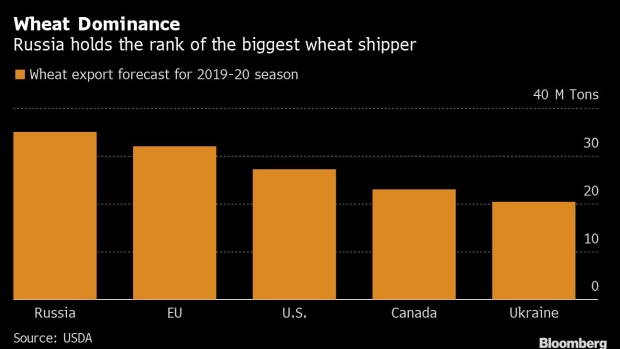 Acros combine harvesters, manufactured by Rostselmash OJSC, unload harvested wheat into a truck during the summer harvest on a farm operated by Svetly Group, in Kamenka village, outside Rostov, Russia, on Friday, July 5, 2019. Saudi Energy Minister Khalid Al-Falih has mentioned the prospect of potential wheat imports from Russia, which has been working toward gaining access to that market. Photographer: Andrey Rudakov/Bloomberg , Bloomberg

(Bloomberg) -- As the coronavirus pandemic disrupts food supply chains around the world, the wheat market is turning its attention back to potential export restrictions in Russia.

The world’s top wheat shipper briefly suspended exports of some processed grains and asked officials whether there should be curbs on overseas sales of consumer goods like foods and medicine. While there’s been no specific government mention of wheat, Russia has a history of shaking up the global market by restricting sales through export taxes, bans or informal limits.

Wheat futures climbed to a two-month high in Chicago on Wednesday as consultant SovEcon said Russia’s agricultural agency delayed issuing safety certificates for some farm products including wheat. A spokeswoman for the agency said it’s issuing the certificates as usual.

Except for a rush at stores earlier this month, Russia hasn’t run short of food yet at the consumer level. Still, domestic wheat prices climbed in recent months and the ruble’s slump has made the grain more appealing to overseas buyers. Russian exports of the grain jumped 35% in the first three weeks of March from a year earlier, researcher UkrAgroConsult said.

“Some measures may be taken,” said Dmitry Rylko, director general at the Institute for Agricultural Market Studies. “Prices for wheat and flour have risen sharply. This may cause the Agriculture Ministry to think what to do next.”

The Agriculture Ministry didn’t respond to questions on whether any wheat-export limits are currently being considered.

SovEcon said on Wednesday that several traders and exporters who expected to earlier this week get certificates needed to ship out farm products like wheat, rapeseed and sunflower seeds have been told to wait longer. Part of the reason could be that agency, Rosselkhoznadzor, is delaying the process until there’s a state decision on any food-export restrictions, the consultant said.

Wheat futures rose as much as 2.7% in Chicago to the highest since late January.

Russian restrictions sent shock waves across in the market in the past. The country imposed an export tax in 2007 to combat rising food costs and a ban in 2010 after a poor crop, curbing supplies and sending futures higher.

As well as delaying grain-safety certificates, the government could introduce an export tax if it decides curbs are needed, according to SovEcon.

“There’s a quite substantial chance that during this season the government may step in and try to regulate the exports,” Andrey Sizov Jr., managing director at Moscow-based SovEcon, said in a video posted on Twitter.

A gauge of domestic wheat prices in Russia has risen near an eight-month high, according to IKAR. In Chicago, benchmark futures rallied 12% in the past week as shoppers boosted food purchases at supermarkets and on speculation China would buy U.S. supplies.

One of Russia’s neighbors has already taken measures for some food products. Kazakhstan, one of the biggest wheat-flour exporters, suspended shipments of the product as well as sunflower oil and seeds, buckwheat and sugar.

What other analysts are saying: