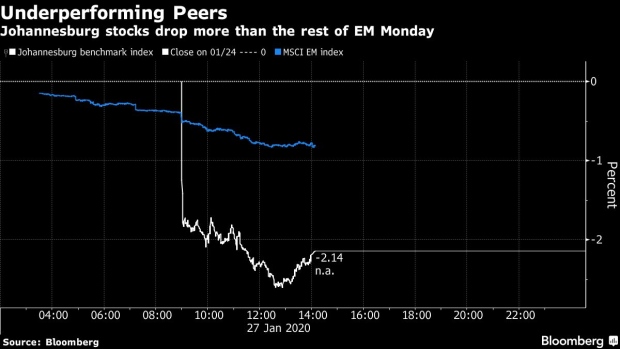 A visitor looks at a digital screen displaying stock futures price information in the reception area of the Johannesburg Stock Exchange (JSE) in the Sandton district of Johannesburg, South Africa, on Monday, Sept. 3, 2018. The emerging-market sell-off may have already battered South Africa's rand, but it could get worse as traders fret about a push for land reform that may have far-reaching economic consequences and is catching the attention of world leaders. Photographer: Waldo Swiegers/Bloomberg , Bloomberg

On a grim day for global equities, South African stocks have been hit harder than most of their emerging-market peers.

The local benchmark index dropped as much as 2.6% in Johannesburg Monday, the steepest decline in more than eight months. The MSCI Emerging Markets Index fell as much as 0.8%. South African stocks came in for particular punishment because of their high exposure to China, source of the deadly coronavirus outbreak that’s chasing investors away from riskier assets toward havens.

Basic materials account for more than 30% of the main index, while market heavyweight Naspers Ltd., its unit Prosus NV and luxury brands group Richemont push the weighting of stocks sensitive to events in China beyond 55%, said Casparus Treurnicht, a money manager at Gryphon Asset Management in Cape Town.

Johannesburg stocks are also suffering more than usual because several Asian markets are shut for Lunar New Year holidays, causing a lack of liquidity and exacerbating the decline, Treurnicht said.

Naspers, which owns almost a third of Chinese internet and gaming giant Tencent Holdings Ltd., the local listings of mining behemoths BHP Group Plc and Anglo American Plc, Richemont and Prosus were the five stocks dragging the most on the FTSE/JSE Africa All Share Index. The benchmark was 2.4% lower as of 2:41 p.m. Banks were also weaker as the risk-off sentiment gripping traders caused a slump in the rand.

The declines would have been worse were it not for the cushion provided by gold miners, in demand as bullion attracted haven buyers. The four biggest positive contributors to the benchmark index were all gold producers as the sector index jumped as much as 5%.

To contact the reporter on this story: John Viljoen in Cape Town at jviljoen@bloomberg.net

To contact the editors responsible for this story: Blaise Robinson at brobinson58@bloomberg.net, John Viljoen, Paul Jarvis