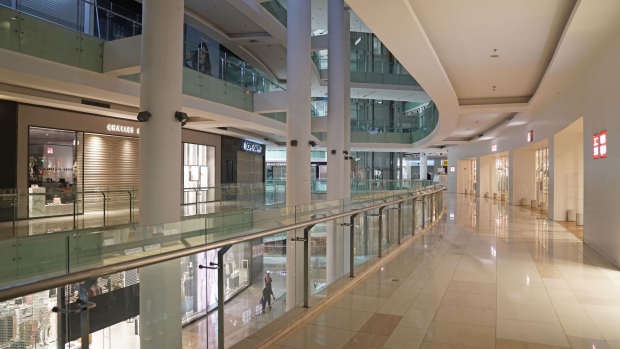 Stores stand closed inside an empty shopping mall during a partial lockdown imposed due to the coronavirus in Jakarta, Indonesia, on Wednesday, May 13, 2020. Indonesian President Joko Widodo urged a cautious approach to lifting of partial lockdowns covering almost 100 million people in a string of regions and cities amid pressure to re-open the economy as the nation’s death toll from the coronavirus pandemic topped 1,000. Photographer: Dimas Ardian/Bloomberg , Bloomberg

(Bloomberg) -- Indonesian companies from airlines to builders of luxury condos and cement makers are warning investors of plunging revenue and profit as the coronavirus pandemic ravages Southeast Asia’s largest economy.

While national carrier PT Garuda Indonesia and PT AirAsia Indonesia are hit by a ban on domestic travel and large scale social distancing rules, property developers are reporting declines in their sales as buyers turn more cautious. The pandemic has shattered businesses from retail to tourism and automobiles with Indonesia’s economic growth now forecast to halve to 2.3% from a year earlier and even contract 0.4% in a worst-case scenario.

Here’s a round of profit and revenue warning from Indonesian companies:

The flag carrier expects operational income to slump about 33% in the first quarter as it grapples with a decline in volume of passengers. The airline reported a 22% drop passengers traffic in the January-March period. Garuda is in the middle of talks to restructure $500 million sukuk and is counting on a credit line from the government to tide over what it calls the “extremely challenging environment for airlines.”

The low-cost carrier, part of Malaysian tycoon Tony Fernandes’ AirAsia Group Bhd, may see its first-quarter net income plunge more than 75%, it said in an exchange filing. Its revenue may fall 25%-50%, hurting the airlines’ ability to repay debt. The carrier doesn’t plan to renew expiring aircraft leases and is renegotiating terms with lessors for lower rental.

The builder of high-end condominiums and shopping malls projects its net income and revenue to decline 51%-75% in the first quarter as partial lockdowns in major Indonesian cities hit operations. The pandemic will also impact its 135-billion rupiah short-term interest liability, it said.

The state-owned builder expects the first-quarter net income to fall more than 75% and revenue slide less than 25%. Operational restrictions due to the Covid-19 outbreak will affect the company’s ability to repay the principal of 4 trillion rupiah short-term debt. Adhi Karya is proposing a rollover of bank cash and non-cash loans that will mature during the pandemic period, it said.

The operator of South Korean movie theater chain CGV Movies in Indonesia, said its net income may tumble more than 75% in the first quarter with revenue expected to decline up to 25%. The company has negotiated lease with property owners, cut operational costs and developed a digital platform to cope with the current situation.

The state construction firm says its first-quarter consolidated revenue may decline 25%-50% net income forecast to dive more than 75%. The pandemic-triggered shutdown of some of its projects may impact its ability to pay the principal of 1.63 trillion rupiah short-term debt.

The cement maker, a unit of conglomerate Salim Group, has shuttered majority of its 10 plants in Citereup area as a result of the partial lockdown. The suspension will slash its first-quarter revenue less than 25%, it said in a filing.

The country’s largest lender by assets cut this year’s loan growth outlook to 5% from previous target of 10%-11%. It sees net interest margin shrinking to 5.5% from previous guidance of 7%.

The tin producer sees net income and revenue risk sinking by 51%-75% in the first quarter and is carrying out efficiency measures in operations to minimize the impact of coronavirus.

The popular household products retailer, which was forced to close dozens of its outlets, sees less than 25% decline in its net income and revenue in the first quarter. It has since intensified online sales and stepped up promotion of goods for curbing infections.

The cigarette maker is seeing lower sales volume as the pandemic weakens people’s purchasing power. It expects sales to fall sharply from April through May, it said in a filing.

The state builder sees consolidated revenue falling 25%-50% in the first quarter as the outbreak hampers some projects, which contributed to less than 25% of its consolidated revenue last year. The company is working to accelerate the progress of other projects to meet its revenue target.

The state construction company says net income and revenue may be 25%-50% lower in the first quarter from a year ago. It has suspended operations in 13% of its 208 existing projects due to the outbreak, while 23% projects are reporting a slowdown in operations due to the implementation of physical distancing.