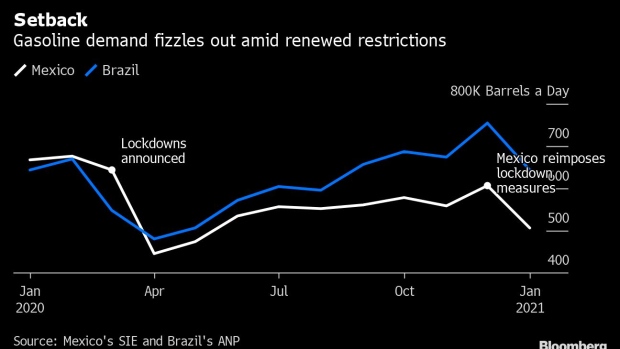 (Bloomberg) -- The havoc that the pandemic is wreaking in Brazil and Mexico is cooling demand for gasoline and diesel in two top markets for U.S. oil refiners.

Gasoline consumption in Mexico, which takes almost six in every 10 barrels of gasoline exported by the U.S., slumped to an eight-month low in January. Diesel sales in Brazil, which had surpassed levels seen prior to the pandemic, fizzled out and are at the lowest levels seen since May.

Click here for PDF with data on fuel sales in Brazil and Mexico.

New lockdown measures in Mexico and Brazil are a setback for a corner of the fuel market that had been a bright spot for U.S. refiners until recently, illustrating how the anticipated return to global normality is still full of uncertainties.

Last year, demand from Latin America helped U.S. fuel makers to weather the effects of the pandemic because Brazil and Mexico eased lockdown measures faster than other economies. Now, both countries had to reimpose restrictions amid a slow rollout of vaccinations.

While the number of deaths from Covid-19 is falling across the globe, Brazil reported record fatalities and Mexico now has suffered the third-most coronavirus deaths of any country.

But the decline in Latin American demand is coming as refiners on the U.S. Gulf Coast are still struggling to restart operations after frigid temperatures forced many to shut down in the third week of February. And the outlook for demand at home is now much brighter.

“The U.S., which lagged behind Latin America in terms of fuel demand last year, is set to surge ahead in the second quarter amid a faster vaccination rollout,” said Paula Jara, an analyst at consultancy Wood Mackenzie Ltd. She expects gasoline demand in the U.S. to rise by 700,000 barrels a day in the second quarter, compared with the first.

U.S. refiners curtailed oil processing by 4.92 million barrels a day because of the freeze. Margins to make fuels are rising with U.S. vaccinations ahead of the summer driving season, when motorists take to the roads and gasoline sales peak.

About 56% of U.S. adults 65 years or older have received at least one shot of the vaccine, according to the Centers for Disease Control and Prevention, or CDC, and Census data compiled by Bloomberg.