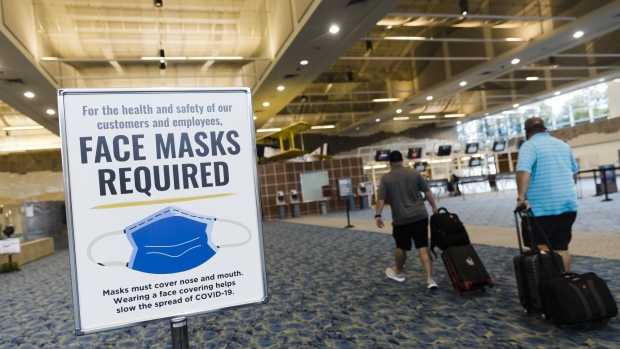 (Bloomberg) -- After a surge in bookings early this summer, U.S. airline passengers are planning fewer trips as the spread of the coronavirus delta variant continues to discourage travel.

Spending for the Labor Day holiday was down 16% from 2019 as of Aug. 21, while bookings were off 15%, according to the Adobe Digital Economy Index. The weekend typically marks the end of stepped-up summer travel for U.S. carriers and demand often rises as families seek to squeeze in a last trip before school resumes.

Adobe’s findings line up with recent warnings from airlines that increased illnesses tied to the variant are slowing sales and prompting customers to cancel reservations, threatening to derail a recovery from last year’s collapse in demand. Southwest Airlines Co. has said the weakness may make it difficult to turn a third-quarter profit. American Airlines Group Inc. said August revenue is coming in below its expectations.

“We expect spend in the month of August to be significantly under July,” Vivek Pandya, Adobe Digital Insights lead analyst, said in a statement Monday. “These two months historically have similar spend levels.”

Online spending for flights dropped to $2.9 billion through the first three weeks of this month, down 33% from the same period in 2019. That was about double the change for July. The number of bookings fell 22% from the beginning of August. The index tracks direct flight bookings for 6 of the top 10 U.S. carriers.

The number of travelers passing through U.S. airport security checkpoints has hovered around 77% in recent weeks, down from an average of 79% in mid-July, according to the Transportation Security Administration.

Ticket prices were 28% below 2019 levels at the start of this year, according to Adobe. Consumers spent $34 billion online for air travel this year through July, down 28% from the 2019 level.